Workers vandalised 50 vehicles over death of a security guard 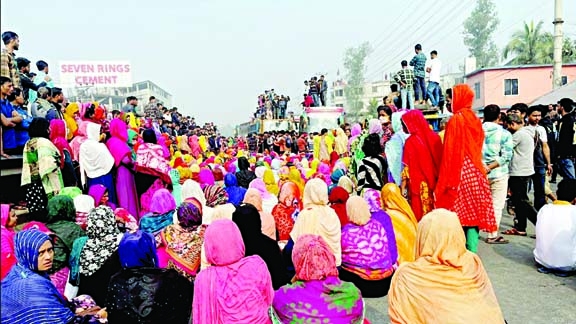 Hundreds of agitated RMG workers block the Dhaka-Tangail Highway in the Chandra area and vandalized 50 vehicles as a truck run over and killed a security guard of a factory in Gazipur\'s Kaliakair upazila on Sunday. NN photo

Gazipur Correspondent :
Garment workers set a truck on fire and vandalised at least 50 other vehicles, after a truck run over and killed a security guard of a factory in Gazipur's Kaliakair upazila on the Dhaka-Tangail highway on Sunday morning.
The deceased was identified as Azadul Haque, 40, of Gaibandha. He used to work as a security guard at a denim factory in Chandra area.
According to eyewitnesses and police, some workers along with Azadul were going to the factory together this morning. Around 8am, a speeding truck hit Azadul and some workers. Azadul died on the spot.
"Factory workers set the truck on fire and vandalised more than fifty vehicles. At one point, the agitated workers blocked the Dhaka-Tangail highway in the Chandra area, bringing traffic on the route to a halt," said Atikur Rahman, officer-in-charge (OC) of Salna Highway Police Station.
He said the guard died as a truck hit him while crossing the highway in Hartakitola area this morning.
Rahman further said agitated by the incident, RMG workers blocked the Dhaka-Tangail highway, vandalised vehicles on both sides of the highway.
Traffic on the highway has been closed for about two hours since the accident, it caused 5-kilometre long tailbacks on both sides of the highway.
Later, police brought the situation under control, he added.