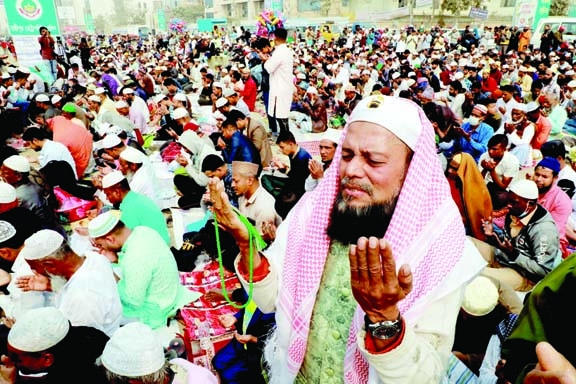 Hundreds of thousands of devout Muslims raise their hands and asked for forgiveness on the second phase of the 56th Bishwa Ijtema on the bank of Turag River in Tongi on Sunday. NN photo

Staff ReporterÂ  :
The second phase of Bishwa Ijtema, one of the largest Muslim congregations in the world, ended with the akheri munajat on the bank of the River Turag at Tongi, on the outskirts of the capital Dhaka on Sunday.
The followers of Muhammad Saad Al Kandhalvi attended the second phase of the Ijtema, which began on Friday.
Maulana Muhammad Yusuf Bin Sadd Kandhalvi, son of Maulana Muhammad Saad Al Kandhalvi, conducted the akheri munajat. The akheri munajat began at about at 12:00pm and it ended at about 12:45pm.
The vehicular movement was remain suspended from 6:00am in the morning till the akheri munajat - from Bhogra Bypass to Addullahpur on Dhaka-Mymensingh Highway, Khamarpara Road, and Abdullahpur to Bypile on Ashulia Road as part of rationalised traffic.
The metro rail was on run from 8:00am to 5:00pm on the day for smooth movement of the devotees.
Several thousand devotees from home and abroad participated in the akheri munajat on the last day of the 2nd phase of Ijtema.Â  Officials from Tongi railway station said that the railway arranged special trains to carry people in areas, including Akhaura, Mymensingh and Cumilla during the Ijtema.
More than 7,000 foreign devotees from over 60 countries attended the second phase of Ijtema.
The first phase took place at the same venue on January 13-15, which was attended by Tabligh group Zubair Hassan's followers.
On 2011, the Tabligh Jamaat authorities split the Ijtema into two phases, dividing the participation of the 64 districts to reduce the pressure on the venue and to ensure better management and security.
But, due to a conflict between the followers of two factions over the nomination of the chief of the World Tabligh Jamaat in December 2018, the Ijtema has been held in two phases based on the following of the faction leaders.