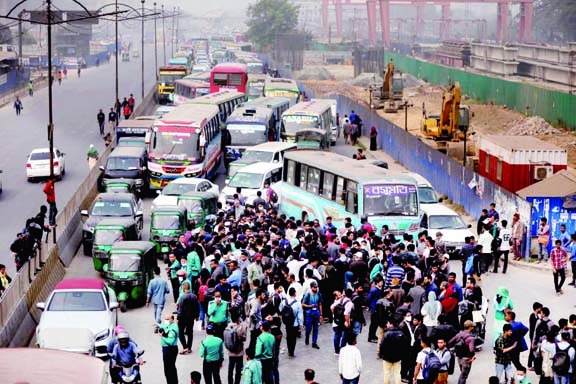 Students of Northern University Bangladesh (NUB) block the Dhaka-Mymensingh Highway at Kawla in the capital on Monday protesting death of their fellow Nadia Akhtar. NN photo

News Desk :
The students of the Northern University of Bangladesh (NUB) on Monday circumvented the highway with a four-point demand in connection with the death of a student of the university, Nadia Akhtar, who was hit by a bus in the capital on Sunday.
Around 12:30pm on Monday, the students brought out a protest march from Northern University and blocked the road in the area adjacent to the Kawla foot over bridge on the Dhaka-Mymensingh highway.
While blocking the highway, the students made a four-point demand. Their demands include firstly, the road permit of Victor Classic Paribahan, which hit Nadia, should be revoked by 11am on Monday.
Secondly, the driver must be brought to book by 12pm on Monday.
Thirdly, Kawla bus should be called "Nadia Bus Stand" and every bus in the city will stop there.
Finally, they demanded fair compensation to be given to the family of the deceased student.
Additional police were deployed at the airport and Kawla area to avoid any untoward incident when the students attempted to block the highway. At around 1pm, when the police removed them from the highway, they went to the Kawla Railway gate area and started a protest.
The police officials at the airport said that police have already arrested the bus driver and assistant. Still, students blocked the highway with various demands. The police explained and removed them.
Police deputy commissioner (DC) of Uttara Traffic Division said that severe traffic jams have been created from Tongi to Kawla on the Mymensingh-Dhaka highway and from Banani bridge to Kawla on the Dhaka-Mymensingh highway due to the students' movement. Later, the police removed the students from the road. Traffic has now returned to normal.