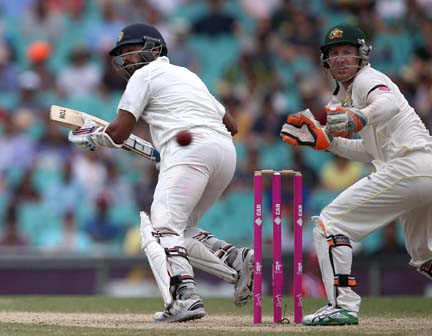 India\'s Murali Vijay (left) watches the ball run down leg past Australia\'s Brad Haddin (right) on the fifth day of their cricket Test match in Sydney on Saturday.

India clung on for a tense draw with three wickets left to deny Australia their third victory of the series in the fourth Sydney Test on Saturday.
The Australians, with nine fielders crowding around the bat towards the final stages, pushed for victory but could not dislodge Ajinkya Rahane and Bhuvneshwar Kumar as the gritty tourists batted it out at 252 for seven.
Rahane was unbeaten on 38 and Kumar was 20 not out when the game was called off with one ball left.
The Australians kept pushing throughout the final session and looked headed for victory once they removed batting mainstays Murali Vijay and skipper Virat Kohli, but the tail end resisted.
Australian skipper Steve Smith was named the player of the series after scoring four centuries for the winning side.
"I thought we were going to get there in the end but India hung on well," Smith said.
"Unfortunately, we didn't quite get there but I'm really proud of all the boys' efforts for this Test match and for the series as well."
The Australians declared at their overnight total of 251 for six, leaving the tourists to hunt down 349 runs to win off 90 overs on the fifth day.
Australia grabbed the vital wicket of Kohli for 46 in the 67th over as he sparred with Mitchell Starc, and Shane Watson took a catch low down at slip.
It completed a magnificent series for the new skipper, with a series aggregate of 692 runs at 86.50, the most by an Indian batsman in a series against Australia.
"The guys stood there, dug it out and pulled out a draw which is satisfying," Kohli said.
"We took them to the end on three occasions, two Tests were draws and one was a loss that could have gone either way.
"I'm really proud of the way the guys have played in this series.
"We certainly do have negatives we want to improve on, especially seeing the way the Australians bowl.
"If we can improve on that we're going to be a very strong test team moving forward."

Vijay was out in the fourth over after tea when he slashed at Josh Hazlewood outside off-stump to be taken by Brad Haddin for 80.
The opener passed fifty for the fifth time in the series and batted for 255 minutes off 165 balls with seven fours and two sixes.
Vijay's series aggregate of 482 at an average of 60.25 was the most by an Indian opener in Australia, eclipsing 464 by Virender Sehwag. Australia's hopes soared when the hapless Suresh Raina went for a pair of ducks, this time he lasted three balls before he was leg before wicket by Starc.
Wriddhiman Saha also went for a duck, trapped leg before wicket by Lyon as India's innings began to quickly fall apart.
Hazlewood got another leg before wicket decision, this time on Ravichandran Ashwin for one and India were three wickets away from defeat with 11.4 overs left. Yet that was as close as the Australians got at the end.
The highest successful run chase in the fourth innings of a Sydney Test remains Australia's 288 for two against South Africa nine years ago.
Vijay gave a few chances before his dismissal, offering a tough chance to Shaun Marsh at short cover on 42 off Ryan Harris in 37th over.
Marsh had two grabs at the ball before it went to ground.