36 killed in a decade 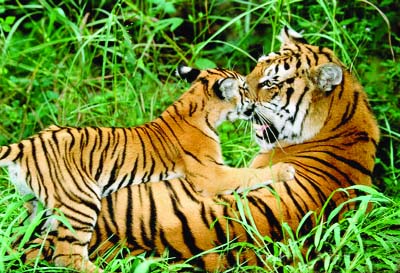 Prof. ABM. Mosharraf Husain, Bagerhat :The very existence of Royal Bengal Tiger in SundarbansÂ  is threatened. The Forest Department could not take any effective measure for the safety and security of Royal Bengal tigers , the main attraction and the virtual guards of Sundarban forest.Â According to the latest statistics, as many as 36 tigers were killed in the hands ofÂ  hunters and poachers, in mass beating and natural calamities during the last one decade alone.Â  Most of them were killed by the poachers and in mass beating when they (tigers) entered intoÂ  the human habitations in search of food.Â Besides , they also died due to the scarcity of food and fresh drinking water.Â  A number of tigers died out of this statistics.Â  The Forest Department disclosed that for want of sufficient equipment and manpower the Department failed to take effective steps to give security to this precious wild beast.Â It is learnt from a source according to the latest statistics, there were 440 tigers in Sundarbans but nobody can tell how many tigers were killed in the devastating cyclone Sidr,Â  Aila and other natural calamities.Â  But according to the forest department, some 24 tigers were killed in the Western Division of the forest (in Khulna and Satkhira districts) and 12 tigers were killed in the Eastern Division of the forest (in Bagerhat district). Out of them 14 tigers were killed in the mass beating in Burigoalini (Satkhira) forest range.According to a social welfare and voluntary organization of Khulna, some 120 tigers of Sundarbans were killed till the year 2012. On the other hand, according to the reports of the Forest Department, 53 tigers were killed during the period from 1980 to 2004. But no tiger was killed in the year 1981, 82, 84, 85, 87 and in 1995 while 3 tigers were killed in year 1983, 2 in 86, 1 in 88, 2 in 90, 4 in 1991, 1 in 92, 4 in 1993, 2 in 94, 5 in 96, 8 in 97, 2 in 98, 4 in 99, 5 in 2000, 1 in 2001, 3 in 2003, 4 in 2005, 5 in 2005,Â  4 in 2007, 4 in 2011 and 1 in 2012.Maximum number of tigers were killed in Chandpai forest range in the Eastern Division (Bagerhat dist). All those tigers were killed in mass beatings, according to the reports available. The local people ascertained 8 causes behind this- natural calamities, increasing of excessive salinity in the river water, acute scarcity of fresh drinking water,Â  scarcity of sufficient food, attack of poachersÂ  and hunters.Â Besides,Â  high price of skins of tigers in the international markets and for that reason Royal Bengal tigers of Sundarban forest became the target of the hunters and poacher The demand of the tiger-skin has been increasing in the international markets since the year 1980. The collection of tiger-skin started in the year 1980 and it is increasing day by day. More than one hundred skins of Royal Bengal tigers were recovered by the forest department and the law enforcing agencies till the year 2011.Â LocalsÂ  said , there are more than one organized gangs of poachers and hunters in the adjacent villages of 4 forest ranges of Sundarban forest. They reside in Patharghata and Chardoani under Barguna district, Sharankhola, Mongla, Morrelganj and Rampal under Bagerhat district, Paikgacha, Koira and Dakop under Khulna district and Ashashuni, Shayamnagar and Kaliganj under Satkhira district. After procuring the passes from the forest offices the poachers enter the forest in the guise of fishermen. Then they catch the tigers using poisonous baits or gun down the tigers. After the death of a tiger its skin is collected, processed locally and sold in the local black-markets at Tk.2/3 lakh each. But it is sold at Tk.10 lakh or more in the foreign markets.Â A forest official who is not willing to mention his name disclosed, there are 2 tranquilizing guns in the forest department for the treatment of the tigers. But there is no skilled hand to handle the guns. Not only that but also there is no sufficient quantity of tranquilizers (drug for tranquilizing) in the forest department. Tiger experts opine that if there were sufficient number of skilled hands and sufficient quantities of apparatus and drugs in the forest department the death toll of tigers could be minimized. According to a survey conducted in the year 1980, there were 450 tigers in the forest, in the year 1984 there were 287 tigers and in the year 1994 there were 702 tigers in the forest. The world famous Discovery TV channel came to Sundarban forest in the month November, 1998 and stayed there for long three months to make a documentary film on the life and nature of the Royal Bengal tigers. But it could not take any footage of the tiger. At last in the month of January, 1999 the channel was able to take footage of a tiger family artificially from Badamtali in Kachikhali sanctuary of Tiger point. Mike Hert, leader of the Discovery channel expressed his dissatisfaction as he failed to take footage on the life and movement of Royal Bengal tigers at Tiger point. He was very much shocked to find very small number of tigers in the Tiger point and Heron point sanctuaries.