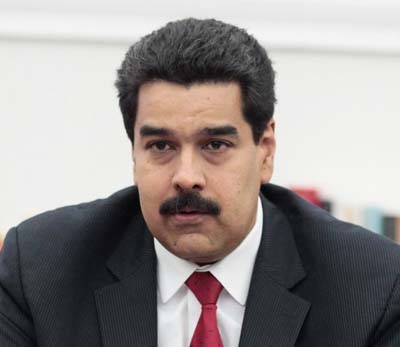 Venezuelan leader Nicolas Maduro has invited US President Barack Obama to join him in talks aimed at resolving the problems between the two countries.
Maduro said the meeting would help "put the truth out on the table".
He has accused US conservatives and media organisations of plotting to overthrow his government.
Earlier on Friday Venezuela revoked the accreditations of CNN reporters covering the country's crisis. Eight people have died in recent protests.
In a news conference on Friday, Maduro said: "I call for a dialogue between Venezuela and the United States and its government.
"Let's initiate a high-level dialogue and let's put the truth out on the table."
Protests in Caracas Protests against the government have entered their second week
The dialogue will be "difficult and complex", Maduro said, until the American government accepted "the full autonomy and independence of Latin America".
On Sunday Venezuela expelled three US diplomats accused of meeting violent groups linked to the opposition.
Earlier Venezuela had revoked the accreditation of CNN's Caracas-based reporter, Osmary Hernandez, and those of two other CNN journalists sent to Venezuela to cover a wave of opposition marches.