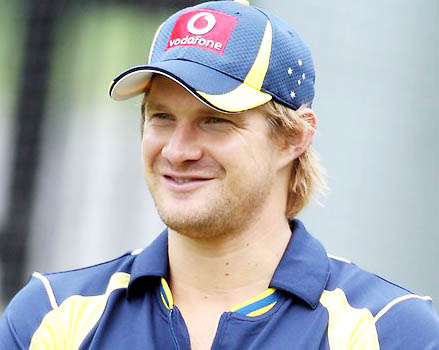 All-rounder Shane Watson said Tuesday he was unsure if he would be fit for Australia's one-day international final against England or India but has no intention of missing the upcoming World Cup.
Watson, 33, was sidelined for Friday's win over England and the washed out game against India in Sydney on Monday with a tight hamstring but said his recovery was "travelling really well".
"(It's) nothing too serious, but more so a precaution just to make sure it settles down over this week and be ready to go again by Sunday in Perth," he said.
"If not then, the practice matches leading into the World Cup."
Australia and New Zealand are hosting the World Cup which begins February 14 and the former are scheduled to play warm-up games against India and the United Arab Emirates.
It is still not known whether Michael Clarke will return to the team for the World Cup with his fitness under a cloud as he recovers from hamstring surgery undergone last month after he injured himself in the first Test against India.
Clarke has been given until Australia's second game of the World Cup against Bangladesh on February 21 to prove his fitness, and has been named in the squad for the tournament.
However, his inclusion could push Australia's ODI captain George Bailey out of the tournament after he leads the team in the first match, something the Tasmanian admitted in a weekend interview.
"If I'm not scoring runs and they pick him, (Clarke) then that's fine," Bailey said.
"That's the nature of the game -- you're scoring runs or you're not scoring runs -- you get picked or you don't. It's obvious -- if Pup (Clarke) is there, then one of the batsmen makes way.
"Whether that's me or someone else, that's how it is."