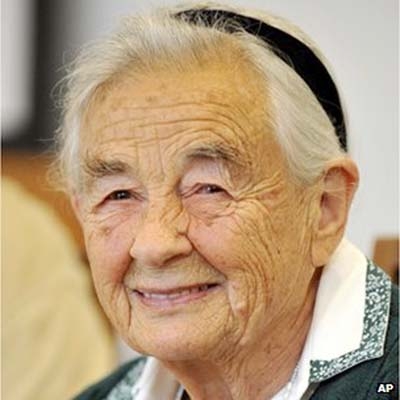 The last surviving member of the Trapp Family Singers, the group whose story inspired The Sound of Music, has died at the age of 99, her family say.
Maria von Trapp died at her home in Vermont on Tuesday, her brother, Johannes von Trapp, told the Associated Press.
He said she was a "lovely woman who was one of the few truly good people".
Von Trapp and her family fled Nazi-occupied Austria in 1938 and ended up performing around the US.
Their story eventually inspired the 1959 Rodgers and Hammerstein musical, The Sound of Music, and subsequent 1965 hit film.
It tells the tale of a young woman who leaves an Austrian convent to become a governess to the seven children of a naval officer widower, Georg von Trapp.
Maria von Trapp was the second-oldest daughter of Capt von Trapp - with his first wife - and was portrayed as Louisa in the musical.
Her family moved to the US state of Vermont in 1942 after visiting during a singing tour, and later opened a lodge in the town of Stowe, which they still operate.
Writing in a blog post on the lodge's website, von Trapp described how it was her ill health as a child that led her father to employ a governess to teach her and her siblings. "She came to us as my teacher and after three years became our second mother," she said.