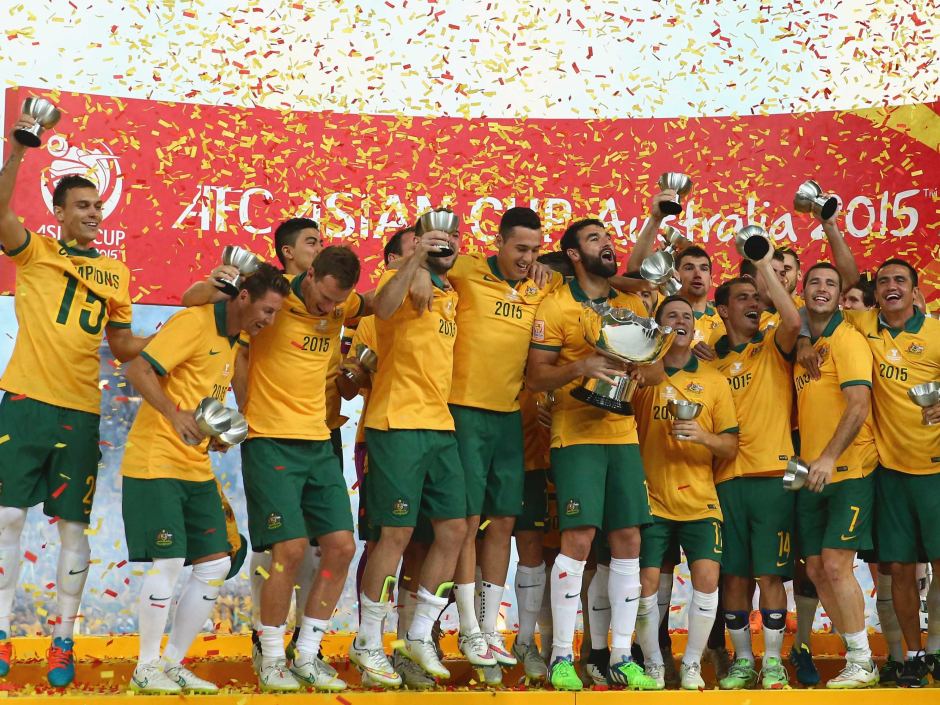 The Socceroos celebrate with the Asian Cup trophy after beating South Korea 2-1 in the final at Stadium Australia in Sydney on Saturday.

Hosts Australia won the Asian Cup after beating South Korea 2-1 in extra time of an electrifying final on Saturday, substitute James Troisi smashing home a dramatic winner.
Troisi broke Korean hearts with the last kick in the first period of extra time after Son Heung-Min had snatched a dramatic injury-time equaliser at the end of normal time.
Australia's triumph gave the Socceroos a first title since defecting from Oceania nine years ago, while South Korea's anguish continued after failing to break a hoodoo in the tournament stretching back to 1960.
Australia, runners-up to Japan in 2011, had been on the brink of victory after a stunning strike from Massimo Luongo on the stroke of half-time, triggering wild celebrations from the waves of fans in green and gold in a crowd of 76,000.
But South Korea's superstar Son produced a moment of sheer brilliance in injury time, bursting through to fire past goalkeeper Mathew Ryan after a clever flick from captain Ki Sung-Yueng.
The Socceroos, the Asian Cup's top scorers with 14 goals, were forced to work hard for victory in a reversal of the group tie between the teams earlier in the tournament, which was dominated by Australia but won 1-0 by the Koreans.
Australian captain Mile Jedinak set the tone for a bruising final when he clattered Son during the early skirmishes, and right-back Ivan Franjic was then booked for a crude foul on Park Joo-Ho.
Defender Kwak Tae-Hwi headed a Ki free kick wastefully wide after 24 minutes, before Tim Cahill forced a smart save from Korean goalkeeper Kim Jin-Hyeon at the other end as both teams came out of their shell.
Son, Australia's tormentor in chief, almost broke the deadlock when he lashed a left-foot volley just over the bar as South Korea pushed hard for the opening goal.
But then Luongo, who has been a revelation for Australia in this tournament, wriggled free to blast a fierce long-range drive past goalkeeper Kim Jin-Hyeon against the run of play.
It was the first goal South Korea had conceded in the tournament on their way to a first final in 27 years.
With the match drifting into stoppage time, Son pounced dramatically, celebrating with the massed ranks of "Red Devils" fans behind the Australian goal.
South Korea were re-energised, but in extra time Tomi Juric picked Kim Jin-Su's pocket and when his cross was pushed out by Kim Jin-Hyeon, fellow substitute Troisi belted the ball into the roof of the net.