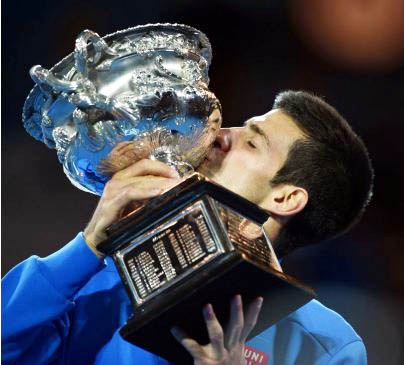 Novak Djokovic proved too strong for Andy Murray as he won a fifth Australian Open title in a punishing final on Sunday.
The Serb, ranked number one, came through 7-6 (7-5) 6-7 (4-7) 6-3 6-0 in three hours and 39 minutes.
It was a third win over British number one Murray in a Melbourne final and brought him an eighth Grand Slam title.
Murray, 27, has now won two of the eight Grand Slam finals he has played in, having lost all four in Australia.
"I would like to congratulate Novak - it is a fantastic record and thoroughly deserved," said Murray.
"It is probably my most consistent Grand Slam throughout my career but I just haven't been able to win."
Murray, who underwent back surgery towards the end of 2013 and was playing in his first Grand Slam final since winning Wimbledon earlier that year, added: "I'm closer than I was a few months ago.
"I'll try to come back next year and have a slightly different outcome in the final."
The Scot, who will return to fourth in the world rankings on Monday, had chances in each of the first three sets of the final but ultimately could not cope with the Serb's pinpoint returning and brilliant defence.
Djokovic, a week younger than his opponent, did look vulnerable at times, hurting his hand in a fall and appearing to struggle with an ankle problem early in the second set.
There were some concerned looks to coach Boris Becker in the stands. He stumbled on more than one occasion and required some energy-boosting fluids at a break down in the third set.
Murray later admitted he had been "distracted" by the Serb's apparent physical issues and, just as at the US Open last September, he could not keep pace with Djokovic in the closing stages.
Djokovic had made a blistering start, racing into a 4-1 lead and going 20 minutes before he offered up a first unforced error.
It was to Murray's credit that he twice hauled back breaks to force a tie-break, but a double-fault at 4-2 and a loose volley at 5-5 simply gave Djokovic too many chances.