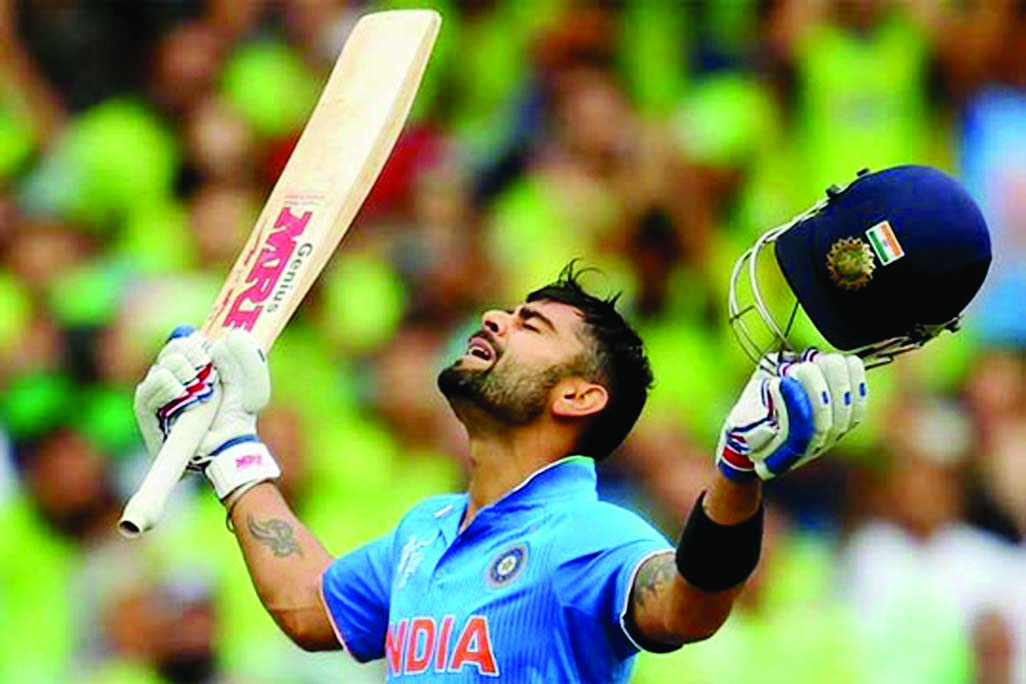 Virat Kohli celebrates his century against Pakistan in World Cup match at the Adelaide Oval in Australia on Sunday. Internet photo

Virat Kohli compiled a composed hundred to help defending champions India begin the World Cup with a 76-run victory over fierce rivals Pakistan on Sunday.
Kohli made 107 and shared century stands with both Shikhar Dhawan (73) and Suresh Raina (74) at the Adelaide Oval.
When Kohli fell as part of Sohail Khan's 5-55, Pakistan looked to have dragged themselves back into the game by restricting India to a reachable 300-7.
But a chase that never gained momentum was wrecked by a collapse of three wickets for one run and they eventually stumbled to 224 all out, Mohammed Shami claiming 4-35.
In isolation, India's win earns national pride in what was billed as the most watched cricket match of all time, with an estimated television audience of one billion, and extends their World Cup record against Pakistan to six wins from as many matches.
It was also an emphatic way to begin the defence of a trophy they won on home soil in 2011 and represents their first competitive win since arriving for a tour of Australia in November.
Pakistan, winners when the tournament was last held in Australia and New Zealand 23 years ago, can take heart from the way they stuck to the task with the ball, but their limp chase was poor.
After all the hype, the action was intriguing, rather than exciting.
Making first use of an excellent pitch on a baking hot day, India's innings was underpinned by Kohli's calm accumulation all around the wicket, his 126-ball stay containing only eight fours.
The right-hander made Pakistan pay for dropping him twice, the first a tough chance in the deep to Yasir Shah when on only three, the second a more straightforward edge behind to Umar Akmal from the spin of Haris Sohail on 76.
When the 26-year-old punched Shahid Afridi to long-on for a 22nd ODI hundred - only Sachin Tendulkar has more for India - he became the first man to score a century in his opening match of a World Cup tournament on two occasions.
Support came from Dhawan, who curbed his attacking instincts, and Raina, who repeatedly heaved through the leg side in his 56-ball knock.
However, after Kohli edged Sohail to Umar, Pakistan fought back through fast bowler Sohail, who demonstrated consistency of length and canny changes of pace.
India scored just 27 runs in their final five overs as five wickets fell, four of them to Sohail.
A chase of 301 looked within Pakistan's grasp at the interval, but they never threatened to keep up with the six-an-over run-rate.
Younus Khan, promoted to open, gloved a Shami bouncer behind early on and, though Ahmed Shahzad and Haris shared 68, Ravichandran Ashwin found turn with a beautiful off-break to have the latter caught at slip.
And, when Umesh Yadav removed Shahzad and Saqaib Mahsood in the space of three balls followed by Umar controversially being given out, caught behind off Ravi Jadeja on review, the contest was effectively over.
Pakistan captain Misbah-ul-Haq did his best to delay the inevitable with some clean striking in his 76, but he was the ninth wicket to fall, to the lively Shami, before Mohit Sharma had Sohail caught at long-on to seal India's victory.