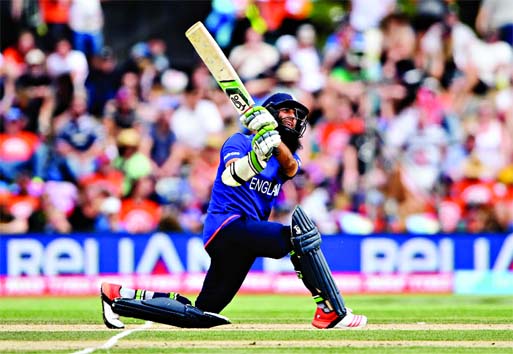 Moeen Ali\'s century was only the second by an England batsman in ODIs in New Zealand, England v Scotland, World Cup 2015, Group A, Christchurch on Monday.

Moeen Ali's century led England to a 119-run victory over Scotland and a first win of the World Cup.
Moeen scored 128 and shared 172 for the first wicket with the stuttering Ian Bell, who contributed 54.
But, when they were parted, England could only manage 131 runs in the final 20 overs as they posted 303-8.
Still, it was too many for Scotland, who never threatened an upset, despite Kyle Coetzer's 71, and were bowled out for 184, with Steven Finn taking 3-26.
Following heavy defeats against co-hosts Australia and New Zealand, the success in Christchurch provides England with a much-needed morale boost.
However, little can be learned as to whether England are in better shape for the sterner tests to come -- starting with Sri Lanka in Wellington on Sunday -- given the nature of the opposition.
Scotland are the lowest-ranked one-day international side in Pool A and slip to the bottom of the table following the three-wicket defeat by New Zealand in their opening game.
Preston Mommsen's side face Afghanistan on Thursday, likely to be their best chance for success in the tournament.
Still, there were times when they troubled England. An attack which began poorly improved to take eight wickets in the final 20 overs and ensure that Eoin Morgan's men did not fully capitalise on a platform of 172-0 after the first 30.
At one point around the beginning of the batting powerplay, England lost three wickets for two runs in three overs, Moeen being caught on the leg-side boundary from the off-spin of Majid Haq, Gary Ballance continuing his poor run by chopping on to his own stumps and Joe Root edging behind.
Before that, Moeen, who gave a half-chance to cover on only seven, scored freely, particularly through fierce pull shots and lofts down the ground.
His 107-ball knock included five sixes and 12 fours and his second ODI century is also his highest score.
This is England's largest victory margin by runs in a WC match since they beat East Africa by 196 runs at Birmingham in 1975.
In contrast, Bell never looked fluent, scratching his way to a half-century in an 85-ball innings that contained only two fours.
It was Bell's wicket, caught at extra cover off the medium pace of Richie Berrington, that began England's slide, a decline halted by the late impetus of Eoin Morgan and Jos Buttler.
Patient at first, Morgan accelerated to a 42-ball 46, including two sixes, while Buttler contributed an inventive 24 from 14 deliveries.
If the win was most welcome for England, then next will be the runs scored by Morgan, who had managed only 19 in his previous five innings. The target of 304 always seemed beyond Scotland and they never came close to pulling off a first win against a Test-playing side as they slumped to a 10th defeat in as many World Cup matches - joining the Netherlands with the worst record in the tournament's history. The opening stand of 172 by Moeen Ali and Ian Bell is England's highest ever World Cup opening stand. England's record opening partnership in all ODIs is 200, set by Marcus Trescothick and Vikram Solanki against South Africa in 2003. That is some way short of the all-time World Cup opening stand of 282, shared between Sri Lankan duo Upul Tharanga and Tillakaratne Dilshan in a Group A game in Pallekele in 2011.
England put in comfortably their best bowling performance of the tournament, admittedly under little pressure, picking up wickets at regular intervals.
Finn, who conceded 49 runs in two overs against New Zealand, was the pick of the seamers, while Moeen (2-47) had Coetzer caught at long-on to end his resistance for 71.
Coetzer had earlier added 60 with Mommsen, who swept Root to deep square leg to spark the collapse that accelerated the end of the contest.
Six Scotland players were dismissed for singles figures as they lost their final seven wickets for 70 runs.
There were two wickets apiece for James Anderson and Chris Woakes, ensuring England's margin of victory was extremely comfortable. But, the fact it could have been greater suggests there is still plenty of room for improvement.
Listen to highlights from Test Match Special's and 5 live Sport's 2015 Cricket World Cup coverage.