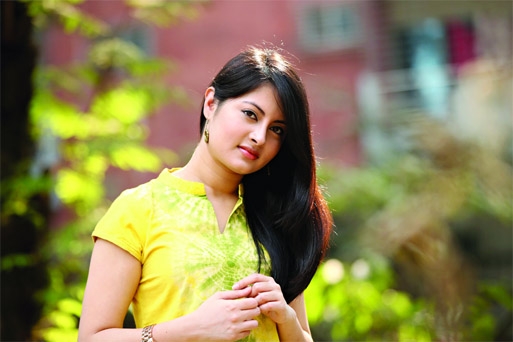 Last year popular model and TV actress Agnila came into Bangladesh only for travelling. To keep requests from the directors, she had to perform in several TV plays.
In fact, she couldnât understand that performing in the television commercials (TVCs) and TV plays Agnila couldnât manage her leisure time.
It may be mentioned that in her earlier visit to Bangladesh Agnila performed as a model in a TVC of GrameenPhoneâs Bondhu package under the direction of Tanvir Hasan. This time she has performed in two new TVCs at a time.
On Monday, Agnila finished shooting of new TVC of Nihar Shanti Amla Kesh Tel under the direction of amitabh Reza, while in previous week she performed as model in another new TVC of RFL Italiano under the direction of Preeto Rahman.
While sharing her feelings performing in two new TVCs Agnila told this correspondent, âI had personal communication with Amitabh bhai. But I didnât get the opportunity to perform under his direction earlier. In the TVC of Nihar Shanti Amla Kesh Tel, I have performed under his direction of first time. I have enjoyed performing in the TVC. Therefore, I have also enjoyed working in new TVC of RFL.â
These two new TVCs will go on air in different satellite channels from March, Agnila said.
From Wednesday Agnila has started to take part in shooting of a special dayâs play titled Matir Bukey Ghumiye Achhe at Pubail in Gazipur. The play is being directed by Al Manusr, which will be aired on Independence Day. In the play, she is acting against Sayeed Babu as pair, Agnila said.
However, at present, Agnila acted only drama serial titled Family Pack, directed by Ali Fida Ekram Tojo, will go on air in any satellite channel soon.
It may be mentioned that Agnila first performed as a model in a TVC of Pepsodent when she was child actress. During that time she also performed in several TVCs of Coca Cola, Mortin, Habib Fan, Bata, etc. After growing up she performed in three TVCs till now.