Michael Phelps may be reinstated for Russia World Championships 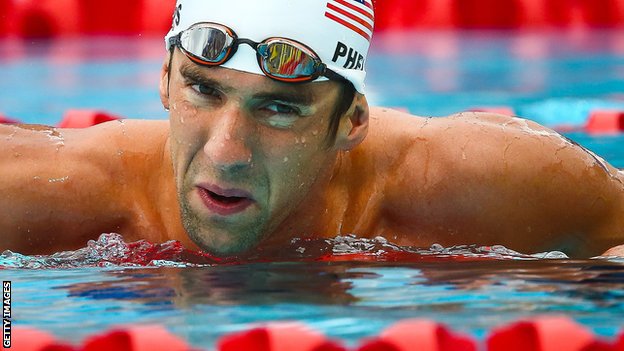 Michael Phelps, the 18-time Olympic gold medallist, may be allowed to compete at the World Championships in Russia after originally being banned.
The American, 29, was given a six-month competitive ban plus exclusion from the Worlds later this year after being convicted of drink-driving.
USA Swimming director Chuck Wielgus told ESPN:Â  "It's complicated, but there are ways in which it could happen.
"There's a pathway for things to be reconsidered - or considered."
Phelps is expected to make his comeback at the US Grand Prix in Arizona in April when his suspension ends.
He announced he was quitting the sport after London 2012 but changed his mind and is preparing for the 2016 Olympics in the Brazilian city of Rio de Janeiro.
He has already qualified for the American team for the World Championships in the 100m freestyle, 100m butterfly and 200m medley and would probably be included in three relays.
The championships are being held in Kazan from 24 July to 9 August.
Phelps was given a one-year suspended prison term and sentenced to 18 months of probation by the courts following a drink-driving incident in his home town of Baltimore in September 2014.