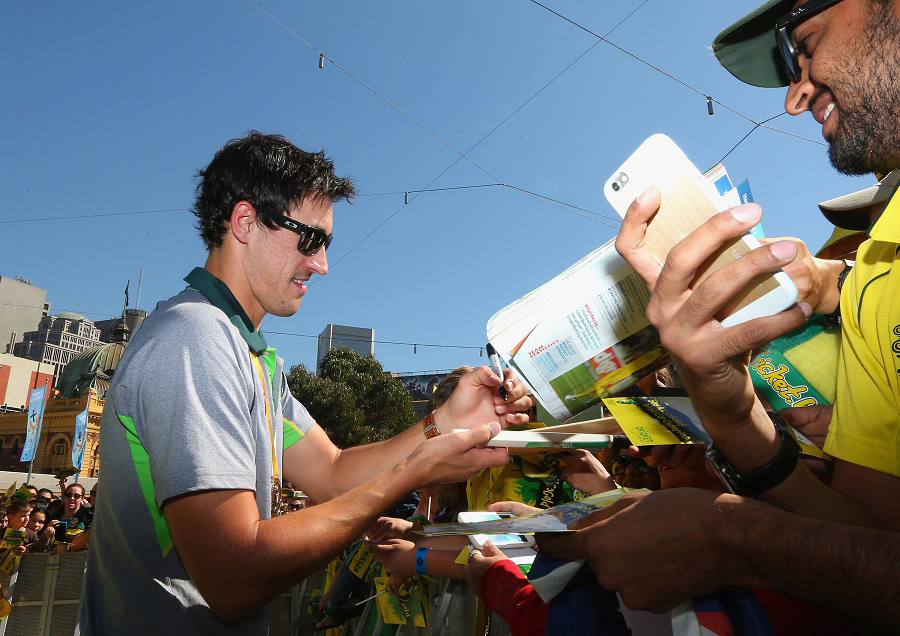 Amidst all the blazing hitting witnessed at the 2015 World Cup, the value of one of cricket's enduring constants was proved again -- nothing slows a run-rate quite like taking wickets.
Few matches better demonstrated this point thanAustralia's dominant seven-wicket win over New Zealand in Sunday's final in Melbourne.
Left-arm fast bowler Mitchell Starc, deservedly named man-of-the-tournament for a haul of 22 wickets at a stunningly meagre average of just over 10 apiece, summed up his brilliant six weeks in the final's opening over.
The dynamic Brendon McCullum, New Zealand's inspirational captain, couldn't lay a bat on the first couple of balls he faced and was then yorked for a duck by an express Starc delivery off the third.
"What this World Cup has clearly shown is that a fast, full and straight yorker is a very good delivery," tweeted former Australian paceman Jason Gillespie.
Starc was one of several left-arm quicks, including New Zealand's Trent Boult, who also took 22 wickets, to star at this World Cup.
Both bowlers were well-supported by aggressive fields set by their respective captains in Australia's Michael Clarke and McCullum, whose sides also showed the value of a genuine five-man attack.
Nevertheless, this tournament witnessed the most 300-plus and even 400-plus totals at a World Cup.
- 'Sensible change' -
Crowds loved the big hits but many within cricket weren't so sure, with the fielding restriction that means just four men are allowed outside the 30-yard circle in the last 10 overs under fire.
"In the old days you had one area you couldn't defend, now there's two and if a good batsman is set, as a bowler you've got very little price," said ICC chief executive David Richardson.
"One of the things we might look at is allowing an extra fielder out of the ring in the last 10 overs...That might be a sensible change."
New Zealand may have lost their maiden World Cup final but on the way they won eight straight matches and in so doing disproved the theory that in order to play good aggressive cricket, it is also necessary to verbally abuse or 'sledge' your opponents.
"New Zealand's semi-final win over South Africa was a brilliant example of how you could play attacking, hard cricket and not worry about the man," said Richardson.
The Black Caps also showed that with the ICC now being run by the 'Big Three' of India, Australia and England -- whose dire effort in crashing out in the first round was no surprise -- that talent, good organisation and strong leadership can help compensate for a small playing base and a lack of financial clout.
One crumb of comfort for England, who will host the 2019 tournament, was that the past two World Cups have now been won by the host nation in India and Australia.