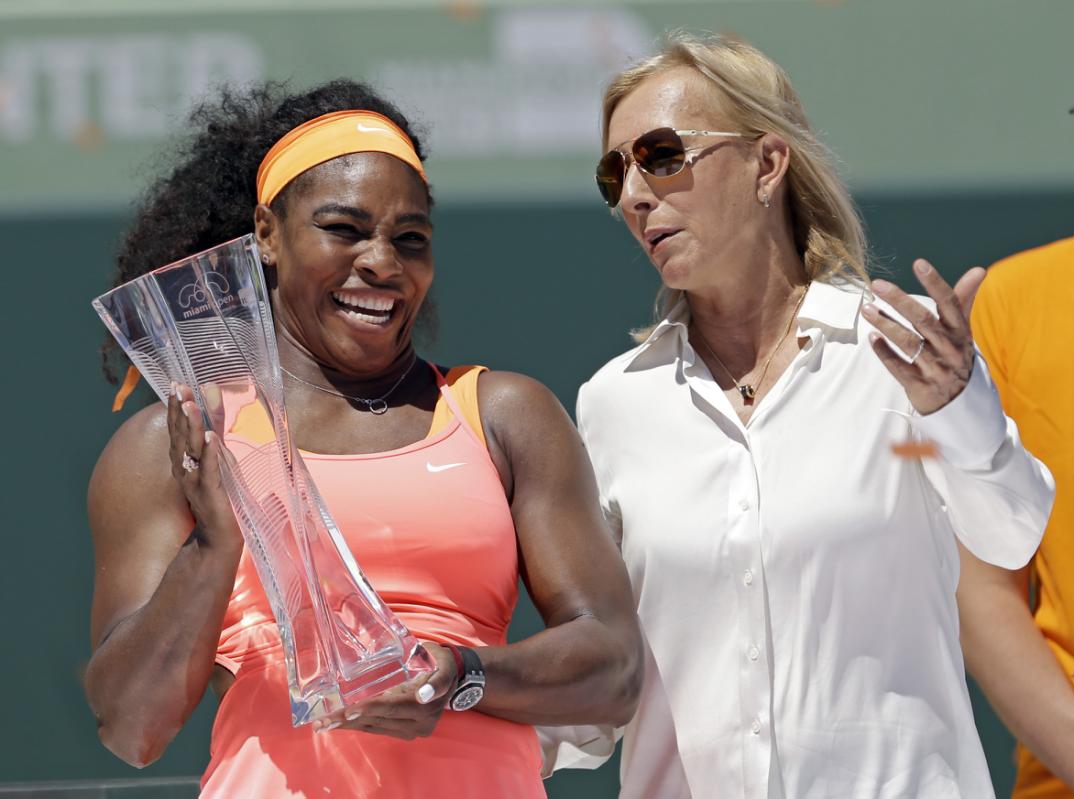 Serena Williams (left) and Martina Navratilova pose for photographers after the women\'s final match at the Miami Open tennis tournament in Key Biscayne, Fla on Saturday.

World number one Serena Williams thrashed Spain's Carla Suarez Navarro to win her eighth Miami Open title on Saturday.
The 33-year-old raced to a 6-2 6-0 victory in 56 minutes to secure her third straight title at Crandon Park.
The American won the final 10 games as she outclassed Suarez Navarro, who will make her top-10 debut next week.
Williams said: "It feels really good to have eight under my belt. I'd like to believe the older I get, the better I get."
Suarez Navarro, 26, went into the biggest final of her career having won just 10 games in four previous meetings with the younger Williams sister, and the 12th seed could add only two more.
The Spaniard began well, even threatening a break of serve at 2-2, 30-30, but Williams slammed the door shut with successive aces and was soon 4-2 in front.

A thumping forehand winner brought up a third set point for Williams after little over half an hour and Suarez Navarro could only fire long.
Williams had hit 16 winners to just two from her opponent and, faced with a break point for the first time at the start of the second set, she produced three unreturnable serves.
It heralded a passage of utter dominance as Williams reeled off 23 out of 25 points.
Suarez Navarro, who will enter the world's top 10 for the first time next week, asked for advice from coach Xavi Budo at a changeover but she was being overwhelmed.
She at least avoided a repeat of her 6-0 6-0 defeat against Williams at the US Open two years ago, but the American brought a swift end to the contest before the hour mark.