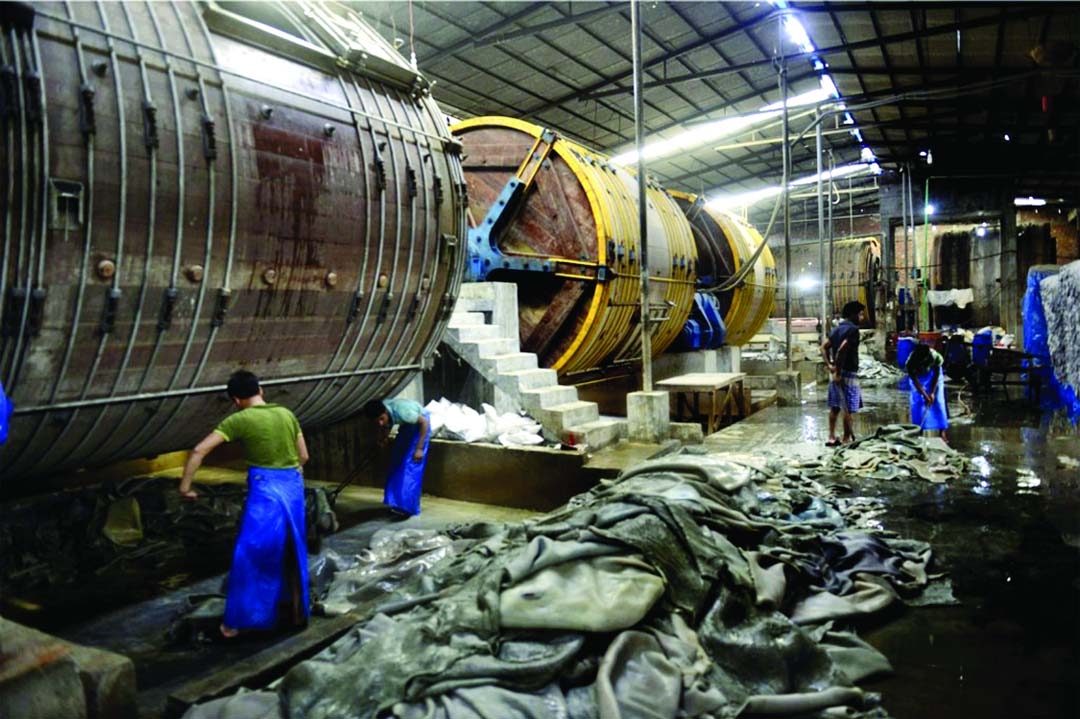 labourers work in a tannery in Dhaka on February 27.

AFP, Dhaka :
Standing knee deep in toxic chemicals, Mokter Hossain loads animal hides into huge drums filled with still more dangerous liquids at a tannery in the Bangladesh capital.
Barefoot and sick with fever, Hossain stops every now and then to cough, a legacy of the job that his doctors warn could one day kill him.
"Some days I am too ill to work," said Hossain, 25, who has spent years inhaling fumes from the hexavalent chromium and other chemicals used to turn the raw hides into soft leather.
"I take medicine to control my skin diseases. If I don't, it gets worse," Hossain adds, gesturing to his arms and legs which are covered in rashes and black spots.
Hossain's tannery is one of 200 in Hazaribagh in Dhaka, where some 25,000 workers toil for as little as $50 a month to produce leather for shoes and other goods for stores in Europe and the United States.
Ten months ago, Western retailers were forced into action after a garment factory complex collapsed killing 1,135 people, one of a string of tragedies that have shone a global spotlight on that sector's shocking labour and safety conditions.
But there are few signs of reform at Bangladesh's leather industry, where conditions are equally atrocious and business is booming thanks to the West's growing demand for cheap, leather items.
Top local activist Rizwana Hasan blames a lack of headline grabbing disasters in the industry that could make consumers think twice about where their shoes and bags are made.
"In these tanneries, death comes slowly," said Hasan, referring to respiratory problems, cancers, skin diseases and other illnesses that doctors blame on long hours and few safety precautions. "[So] While Bangladesh garment disasters make headlines across the world, the even more terrible conditions at the tanneries don't."
"These tanneries remind us of factories in the 19th century," she added.
An AFP reporter recently saw children as young as 14 working inside one tannery, whose floor was awash with chromium effluent and where cow and goat skins caked in salt were stacked in piles.
Activists are also frustrated by murky supply chains in Hazaribagh that make it difficult to link specific tanneries to individual top Western retailers, and possibly shame them into action.
In Hazaribagh, the environmental and public health costs of the growing industry are on full display.
Every day, the tanneries collectively dump 22,000 cubic litres of toxic waste, including cancer-causing chromium, into the Buriganga - Dhaka's main river and a key water supply - according to the environment ministry.
Nearly 200,000 people live in Hazaribagh including on the banks of the Buriganga, recently voted one of the world's most contaminated rivers by a New York-based environmental group.
The area, once a pleasant, semi-rural district, has been transformed into a patchwork of toxic swamps, garbage landfills and mountains of decomposing leather scraps.
Dozens of small recycling plants burn the scraps to produce fish and poultry feed - a flourishing offshoot of the industry. Black smoke covers the sky and there is a stench in the air.
"It is worse than hell. But we don't have any choice," said Munia, 19, who uses one name, adding that she has developed breathing problems from her job at one of the recycling plants.
Activist Hasan has been embroiled in a long legal battle to get the tanneries relocated outside of Dhaka and equipped with waste treatment plants. She blames close links between government and powerful owners of the tanneries, a vital source of employment, for the lack of action.
"The department of environment, the department of labour inspectors hardly make any inspection there. The reasons could be political as the government doesn't want to upset the business community."
The government concedes tanneries are breaking environmental laws, but favours persuading, rather than forcing them, to improve, while debate drags on about who would bear the cost of any move.
"The tanners do not want to relocate, they want to stay here. They make excuses so that the relocation is delayed," Munir Chowdhury, a former director at the department of environment, told AFP.
As the stalemate continues, business booms in Hazaribagh thanks to growing global demand for leather and hiked manufacturing costs in China that have been driving Western buyers to Bangladesh.
Leather and leather goods, including shoes, are the impoverished country's fastest growing exports, and combined shipments grew 35 percent in the last half of the financial year ending December, compared to the same period last year, export bureau figures show.
"Both the Western buyers and the tanners are addicted to Hazaribagh's cheap labour and lax environmental enforcement standards. It won't go away unless we have pressure from all sides," said Hasan.
But there are signs of improvements in the industry where some tanneries, at least, have shunned the lowest-cost formula.
Apex Adelchi, which supplies to retailers such as Macy's in the United States, and UK-based Jones Bootmaker which owns Clarks, have set up environmental-friendly tanneries to woo high-end chains.
"We are seeing much higher levels of consciousness and awareness [from foreign buyers] in terms of environmental compliance," said Apex's chief executive Nasim Manzur.
He said it was in Bangladesh's "long-term interest to improve working standards and environmental standards" despite the extra costs for tanneries and buyers that reforms would bring.