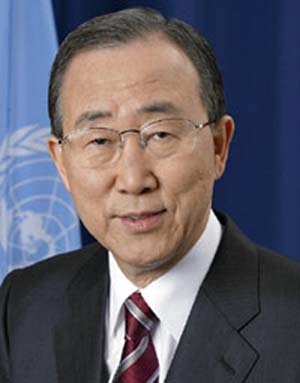 United Nations Secretary General Ban Ki-moon has urged the Venezuelan authorities to "listen carefully to the aspirations" of protesters and engage in dialogue with the opposition.
His comments came before a meeting in Geneva with Venezuelan Foreign Minister Elias Jaua.
Ban said protesters "must resort to peaceful means in delivering and conveying their messages".
Eighteen people have died in weeks of anti-government demonstrations.
Jaua, who is in Geneva for a meeting of the UN's Human Rights Council, said Venezuela was the victim of a "psychological war" perpetrated by the media.
"The propaganda carried out by some national and international media corporations conveys the wrong idea that there is widespread chaos in our country and indiscriminate repression against the people," he said.
It was aimed, he said, at portraying Venezuela as a country that violates human rights to "justify foreign intervention".
Ban Ki-moon in Geneva Ban Ki-moon has held talks with Foreign Minister Elias Jaua
After the meeting with Jaua, the UN issued a statement saying that Ban had "reiterated his hope to see reduced tensions and the necessary conditions to engage in meaningful dialogue".