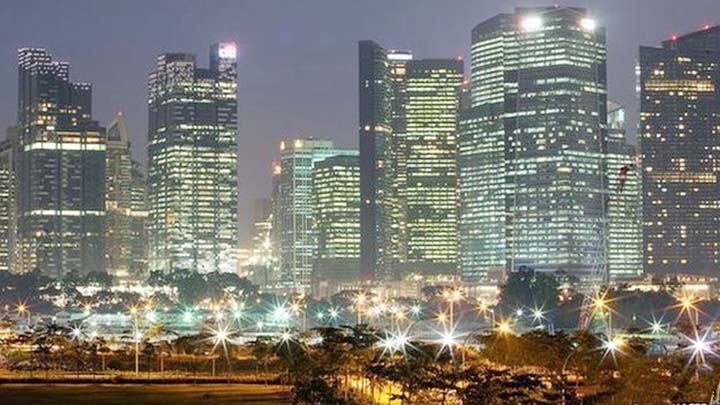 Singapore has topped 131 cities globally to become the world's most expensive city to live in 2014, according to the Economist Intelligence Unit (EIU).
The city's strong currency combined with the high cost of running a car and soaring utility bills contributed to Singapore topping the list.
It is also the most expensive place in the world to buy clothes.
Singapore replaces Tokyo, which topped the list in 2013.
Other cities making up the top five most expensive cities to live in are Paris, Oslo, Zurich and Sydney, with Tokyo falling to sixth place.
The EIU's Worldwide Cost of Living Survey is a relocation tool that uses New York city as a base. It looks at more than 400 individual prices.
The top 10 cities this year have been dominated by Asian and Australasian cities as well as some in Europe.
"Improving sentiment in structurally expensive European cities combined with the continued rise of Asian hubs means that these two regions continue to supply most of the world's most expensive cities," said the editor of the report, Jon Copestake.
"But Asian cities also continue to make up many of the world's cheapest, especially in the Indian subcontinent."
Most Asian cities that top the list are there for predominantly higher costs of groceries. Tokyo is still at the top of the list for everyday food items. However, not all Asian cities are tough on the wallet. India's major cities - including Mumbai and New Delhi - were found to be among the least expensive in the world. Mumbai's prices are kept low by large income inequality.
The low wages of many of the city's workers keep spending low, and government subsidies have helped them stay that way.
Outside of the subcontinent, Damascus in Syria saw the largest drop, becoming the fourth cheapest city in the world as the country's ongoing conflict has led to plummeting prices.
Watch: Toby Iles from the Economist Intelligence Unit (EIU) explains to Sharanjit Leyl why Singapore is the most expensive city to live in
While the EIU's survey takes into account the cost of living, other firms employ different research methods.
Mercer conducts research to determine the most expensive cities for expatriate living.