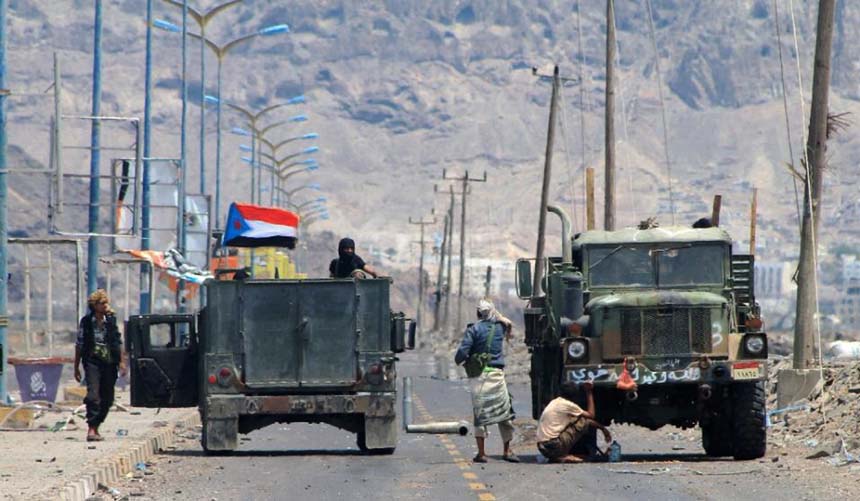 Supporters of Yemen\'s Southern Separatist Movement keep position around armed vehicles flying the movement\'s flag near the International airport in the port city of Aden, as battles against Shiite Huthi rebels continue.

Saudi Arabia says it will consult allies for temporary halt as UN urges coalition to stop targeting Sanaa airport.
Saudi Arabia is considering temporary halts in coalition air strikes against Houthi fighters in Yemen to allow for aid deliveries, the kingdom's foreign minister has said.
Adel al-Jubeir's announcement came as clashes raged in southern Yemen between the Houthis and fighters allied with exiled President Abd-Rabbu Mansour Hadi, killing at least 30 people.
Saudi Arabia will consult members of the coalition on "finding specific areas inside Yemen ... where all air operations will be paused at specific times to allow for the delivery of aid", Jubeir said in a statement on Monday.
For his part, John Kerry, US secretary of state, will visit Riyadh for discussions with Saudi government leaders on May 6 and May 7 to discuss the "humanitarian pause".
The UN has repeatedly warned that impoverished Yemen faces a major humanitarian crisis and calls have been growing for efforts to increase aid deliveries.
Jubeir said Saudi Arabia "plans to establish a centre on its territory to be in charge of coordinating all humanitarian aid efforts" with the UN, donors and other relevant agencies.
He warned the rebels against "taking advantage" of any pause in the bombing.
Saudi Arabia "will deal with any violations in connection with the suspension of air strikes or movements that hinder humanitarian efforts", he said.
Also on Monday, the UN said the Arab coalition should stop targeting Yemen's Sanaa airport.
"No flights can take off or land while the runways are being repaired," Johannes Van Der Klaauw, UN humanitarian coordinator for Yemen, said in a statement.
"I strongly urge the coalition to stop targeting Sanaa international airport and to preserve this important lifeline - and all other airports and seaports - so that humanitarians can reach all those affected by the armed conflict in Yemen."
The UN has called for a humanitarian pause in the conflict, as relief agencies say they desperately need supplies, including fuel to run infrastructure such as hospitals.
It warned that key infrastructure in the war-torn country, including water supplies, health services and telecommunications, are on the verge of breaking down due to a major fuel shortage.
The UN's Van Der Klaauw, said on Saturday that an arms embargo was affecting delivery of supplies, urging a humanitarian pause "at least for a couple of days".
Senegal said on Monday that it was sending 2,100 troops to help back the military intervention led by Saudi Arabia, becoming the first sub-Saharan African country to contribute soldiers to the effort.
"This Senegalese contribution to the international coalition is equally aimed at protecting Islam's holy places Mecca and Medina which are also threatened by these terrorist groups,'' Mankeur Ndiaye, foreign affairs minister, said.
At least 1,200 people have been killed in fighting in Yemen since March 19 and thousands more have been wounded, according to the UN. It estimates that at least 300,000 people have been displaced by the conflict.
Meanwhile, bad weather has cut links with a remote village in Nepal where dozens of villagers and trekkers are believed to be buried under an avalanche set off by last month's devastating earthquake, officials said on Tuesday.
The death toll from the April 25 earthquake in the Himalayan nation has reached 7,557, the government said.
About 100 bodies were recovered on Saturday and Sunday at Langtang village, 60 km (37 miles) north of Kathmandu, which is on a trekking route popular with Westerners. The entire village, which includes 55 guesthouses for trekkers, was wiped out by the avalanche and rescuers are digging in the snow for signs of about 120 others believed buried.
Gautam Rimal, assistant chief district officer in the area where Langtang is located, said authorities had not made contact with Langtang for more 24 hours because of bad weather.
"We hope to send a rescue helicopter today (Tuesday) to the area," he said. "We'll know the situation then."
Â The dead include at least seven foreigners, but only two had been identified, he said.
The government has begun asking foreign teams to wrap up search and rescue operations as hopes of finding people alive in the rubble receded.
"They can leave. If they are also specialists in clearing the rubble, they can stay," Rameshwor Dangal, an official at Nepal's home ministry, told Reuters on Monday.
A European Union source said only about 60 citizens from the 28-nation bloc were still unaccounted for. Last week a senior EU official had estimated around 1,000 EU citizens were missing after the quake.