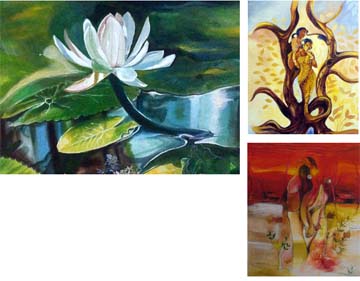 Sheikh Arif Bulbon :
Dilruba Latif Rosyâs paintings stem from a philosophy of âbeauty.â Beauty is somewhat recognised as feminine in the sense of cultural norms which interlink a womanâs appreciation for her beauty in this context and distinguish a manâs value to other âmasculineâ qualities and capabilities.
In light of other traditional concepts and isms, beauty is depicted as an aspect of something divine in contrast with the virile qualities or male deities.
Following that essence, women are posited to be more beautiful and with less fierceness, as beauty recoil from hurting and harming others. Thus, they can be anointed with the notion of having the closest of pureness.
Artist Dilruba Rosy was born in 1963. She completed her BFA from the Faculty of Fine Arts of Dhaka University in 1986. She had two solo exhibitions and also participated in large number of group exhibitions including Canvas group exhibition at TSC in 1981, annual group exhibition at Zainul Gallery in 1983, 4th Asian Art Biennale Exhibition at Bangladesh Shilpakala Academy in 1987, Womenâs Day group show at Gallery Chitrak in 2001, annual art exhibition, Japan- Bangladesh group exhibition at Shilpakala Academy in 2013, Japan Bangladesh group exhibition at Gallery Chitrak in 2014.
Dilruba Latif Rosy currently working as a senior designer at Bangladesh Television.
Dilruba Rosy fleshes out another conviction that reflects her rumination, she talks about loneliness that is more than the disappointment of having to spend a day off at home.
The clinical definition of loneliness is a sustained sense of a lack of closeness, of emotional intimacy with others. Itâs hard to admit to and one feels bleak and worthless. She believes that loneliness makes one feel unloved. It isolates us and makes us feel undeserving of exactly what it is that will alleviate it- other peopleâs care.
The third solo painting exhibition of Dilruba Latif Rosy titled âPainted Loveâ is going on at La Galerie of the Alliance Francaise de Dhaka (AFD) in the cityâs Dhanmondi area now. The exhibition was inaugurated on May 4.
Information Minister Hasanul Haq Inu inaugurated the exhibition as the chief guest, while eminent artist Prof Rafiqun Nabi and noted art critic Moinuddin Khaled also attended the ceremony as special guests on the occasion. Bruno Plasse, Director of AFD, gave welcome speech at the inauguration.
The exhibition will end on May 12.