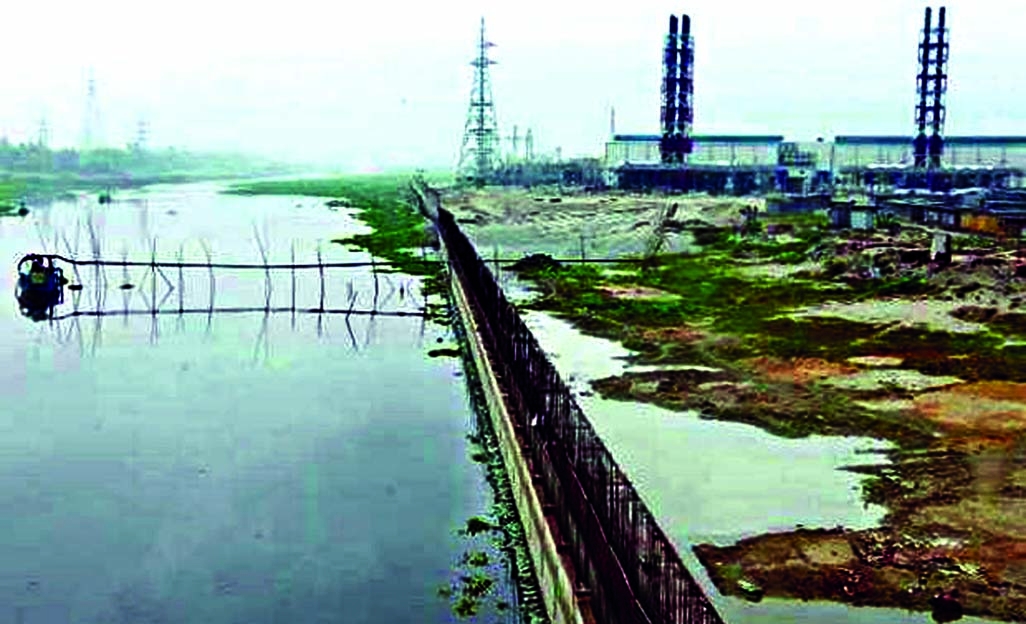 Status quo on power plant construction by Orion Group in Fatullah being preserved as per order of the High Court. This photo was taken on Wednesday.

The photo along with a report on the ongoing construction of a power plant in Fatulla was published in the Bengali-language daily 'Kaler Kantha' The High Court has issued an order to preserve the status quo on the construction of a power plant of the Orion Group on river Buriganga.
It also issued a status quo on the ongoing construction for the power plant on the river. The 102MW oil-based power plant located in Narayanganj's Fatulla was scheduled to start operation on an experimental basis this month. The bench of Justices Md Ashfaqul Islam and Md Ashraful Kamal issued the order on Wednesday after hearing a supplementary appeal on contempt of court charge. It also summoned the chairman of Bangladesh Inland Water Transport Authority (BIWTA) and director general of Environment Directorate on Apr 8 to explain their failure to implement a previous court verdict. The appeal was filed based on a Mar 3 report of Bengali language daily 'Kaler Kantha'.
Advocate Manzil Murshid who argued for the petitioner said the High Court had earlier ordered protection of the rivers. A contempt of court was also issued for not implementing the order. The High Court summoned the two government officials for not complying with the order, Murshid said.
Digital Power and Associates Limited, a concern of Orion Group, is setting up the power plant. Bangladesh Power Development Board signed an agreement with the company on Aug 1, 2012.
According to the report published in 'Kaler Kantha', Orion Group is building the power plant by encroaching the Buriganga river in Fatulla. The work on the power plant is in its final stage.
"Orion did not think it necessary to get final approval of the Environment Directorate before setting up the plant. It is mandatory to ensure environmental impact assessment (EIA) but it was not done." The High Court had on June 25, 2009 ordered the government to save four rivers of Dhaka following a petition filed by the Human Rights and Peace for Bangladesh, an NGO. The Appellate Division also upheld the rule.