Chashi Nazrul, Moumita, Subrata together in movie for first time 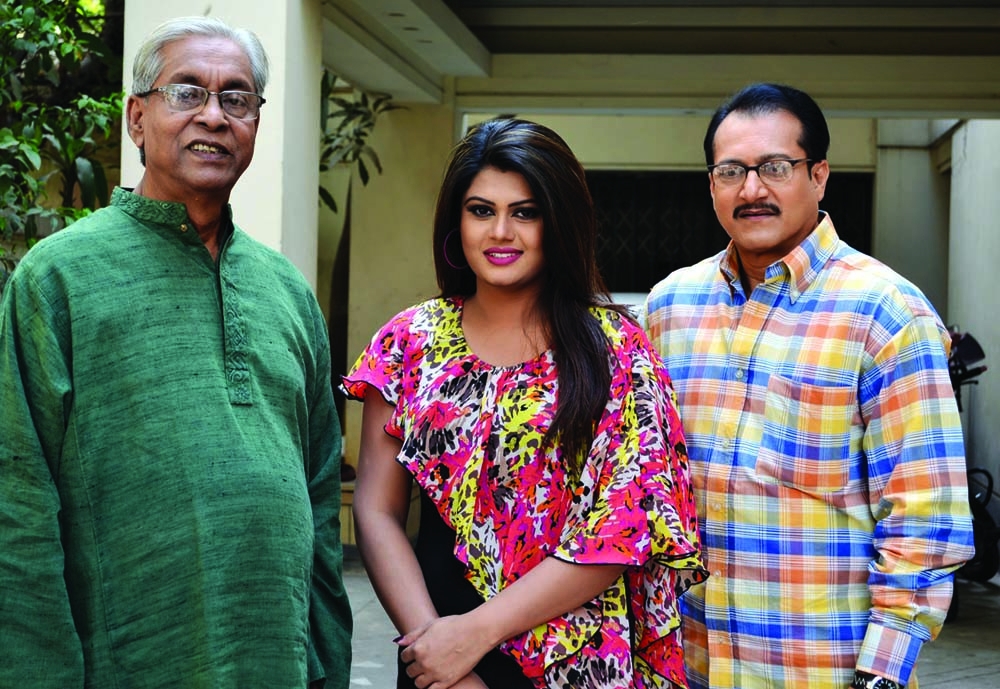 Noted filmmaker Chashi Nazrul Islam is popularly known to all as a film director. Besides giving direction, sometimes he also performs in movie. In 1961, he first performed in a documentary titled Shomadhan, directed by Fateh Lohani. Later he acted in role of a villain in Syed Awal directed movie titled Ontorongo. He performed in many movies later.
On the other hand, Subrata first performed in role of a hero in Mohammad Hannan directed movie titled Rai Binodini. Anju Ghosh performed against him in the movie.
But under the direction of Chashi Nazrul Islam Subrata first performed as hero in movie Shasti. Later he performed in many movies one after another like Megh-er Pore Megh.
But for the first time, Subrata and Chashi Nazrul have performed together in a movie titled Matir Pori, which is being directed by Saimon Tariq. Film actress Moumita is acting in role of heroine in the movie where Symon Sadik is working against her.
Shooting of first phase of the movie was wrapped up on Thursday. Moumita earlier performed in role of lead heroine in Kalam Kaisar directed movie Tomar-e Achhi Tomar-e Thakbo and Raju Chowdhury directed movie Tui Shudhu Aamar. Matir Pori will be Moumitaâs third movie.
In the movie Matir Pori, Subrata and Chashi Nazrul Islam performed in role of sibling.
While talking in this regard Chashi Nazrul told this correspondent, âDirector Saimon Tariq is very close to me as like younger brother. Story of his movie is nice. For this reason, I agreed to perform in his movie.â
Subrata shared his feelings by this way, âIn fact, I always try to work in good story and script's movie. But to work with Chashi bhai is really an exceptional experience for me.â
Heroine Moumita said, âI am really a newcomer in this field. I have worked with noted actors in this movie. Itâs really a great experience for me to work with them.â
Shooting of second phase of Matir Pori will again start on March 17, said its director Saimon Tariq.
On the other hand, Chashi Nazrul Islam directed movie Bhul Jodi Hoi is scheduled to be released in May.
Meanwhile, Subrata has started to work in Idris Haidar directed new drama serial Palonko from last week, Subrata said.Â