KL Jet vanishes with 239 on board

Presume crashed into sea off Vietnam 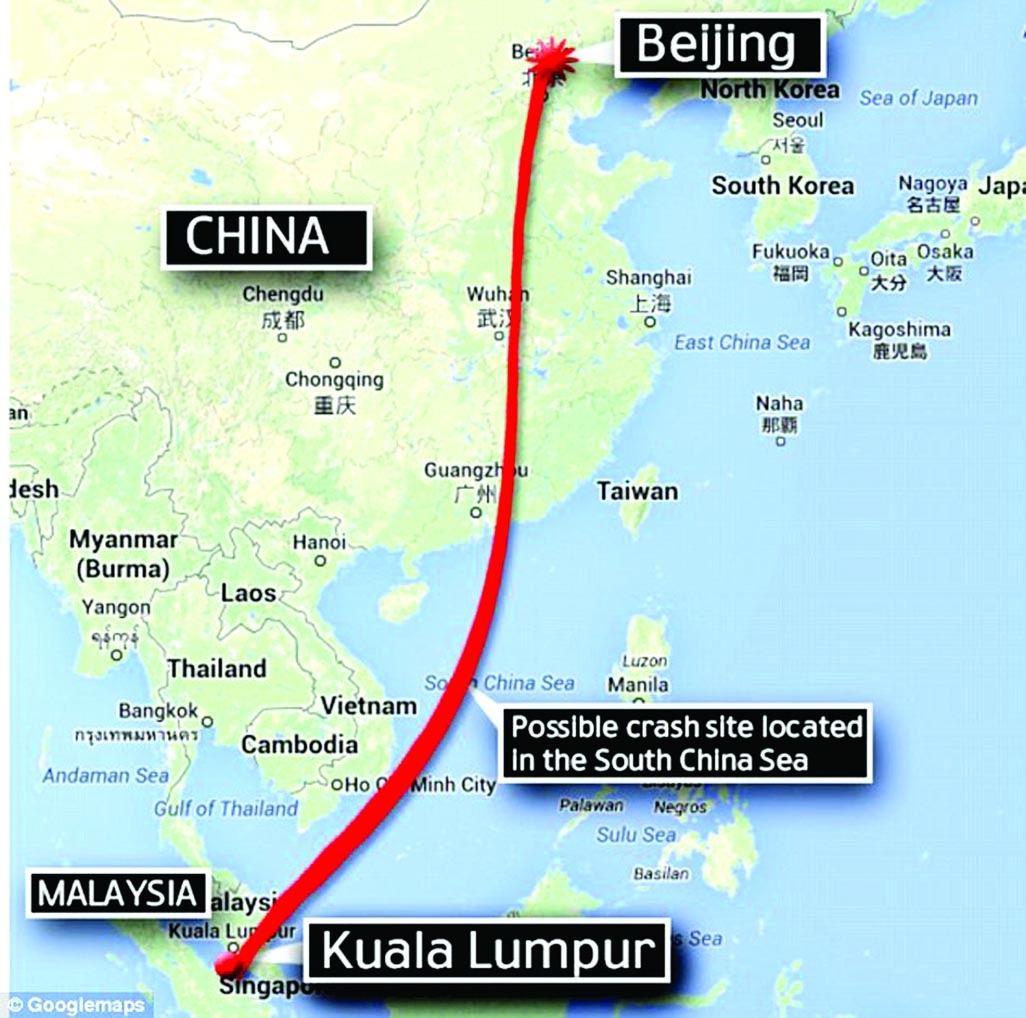 Planes and ships from south-east Asian states have joined forces to search the South China Sea for a Malaysia Airlines jet, missing with 239 people on board.
Flight MH370 vanished at 18:40 GMT Friday (02:40 local time Saturday) after leaving Kuala Lumpur for Beijing, where it was expected at 22:30 GMT.
The aerial search has been halted for the night but sea operations continue.
No wreckage has been reported by the airline, but Vietnamese planes reported seeing oil slicks in the sea.
The Vietnamese government said two slicks, about 15km (9 miles) long, were consistent with those that could be left by an airliner and had been detected off southern Vietnam.
However, there is no confirmation the slicks relate to the missing plane.
Distraught relatives and loved ones of those aboard are being given assistance at the airports.
The relatives and friends waiting to meet passengers from flight MH370 have been taken to the Lido Hotel, a short drive from Beijing Airport's Terminal Three.
Some are of course clearly very distressed and volunteers are providing them with support. But there have been complaints, and at least one angry outburst, about the lack of information from the airline. "We've waited for hours and they've told us very few details," one man said.
Some of the anger has also been directed at the large group of journalists gathered outside the room in which the relatives have been taken to. "Don't you all have families?" one is reported to have asked. A statement from Malaysia Airlines says it has sent another team of "caregivers and volunteers" from Kuala Lumpur who are expected to arrive in Beijing later tonight.
"We are doing everything in our power to locate the plane," Malaysian Transport Minister Hishammuddin Hussein told reporters in Kuala Lumpur.
Malaysia Airlines chief executive Ahmad Jauhari Yahya said the focus was on helping the families of those missing. He said that 80% of the families had been contacted.
The plane reportedly went off the radar south of Vietnam.
Its last known location was off the Ca Mau peninsula although the exact position was not clear.
The Boeing B777-200 aircraft was carrying 227 passengers, including two children, and 12 crew members.
Malaysia's military said a second wave of helicopters and ships had been despatched after an initial search revealed nothing. The US has agreed to help with its aircraft too, Malaysian Prime Minister Najb Razak said.
Territorial disputes over the South China Sea were set aside temporarily as China dispatched two maritime rescue ships and the Philippines deployed three air force planes and three navy patrol ships. Singapore is also involved, while Vietnam sent aircraft and ships and asked fishermen in the area to report any suspected sign of the missing plane.
"In times of emergencies like this, we have to show unity of efforts that transcends boundaries and issues," said Lt Gen Roy Deveraturda, commander of the Philippine military's Western Command. The passengers were of 14 different nationalities, Jauhari said. Among them were 152 Chinese nationals, 38 Malaysians, 12 people from Indonesia and six from Australia.
The pilot was Capt Zaharie Ahmad Shah, 53, who joined Malaysia Airlines in 1981, Yahya said.
Friends and relatives expecting to meet passengers from the flight in Beijing were instructed to go to a nearby hotel where officials were meant to be on hand to provide support. "They should have told us something before now," a visibly distressed man in his thirties told AFP news agency at the hotel.
"They are useless," another young man said of the airline. "I don't know why they haven't released any information." In Kuala Lumpur, Hamid Ramlan, a 56-year-old police officer, said his daughter and son-in-law had been on the flight for an intended holiday in Beijing.
"My wife is crying," he said. "Everyone is sad. My house has become a place of mourning. This is Allah's will. We have to accept it." The plane had been flying at an altitude of 35,000ft (10,700m) and the pilots had not reported any problems with the aircraft, Fuad Sharuji, Malaysia Airlines' vice-president of operations control, told CNN.
Air traffic control lost contact with the Malaysia Airlines plane after leaving Kuala Lumpur
The aircraft never made it into Chinese airspace as John Sudworth reports from Beijing International Airport
Malaysia's national carrier is one of Asia's largest, flying nearly 37,000 passengers daily to some 80 destinations worldwide.
The route between Kuala Lumpur and Beijing has become more and more popular as Malaysia and China increase trade, says the BBC's Jennifer Pak in Kuala Lumpur.
The Boeing 777 had not had a fatal crash in its 20-year history until an Asiana plane came down at San Francisco airport in July of last year. Three teenage girls from China died in that incident. Boeing said in a statement posted on Twitter: "We're closely monitoring reports on Malaysia flight MH370. Our thoughts are with everyone on board."