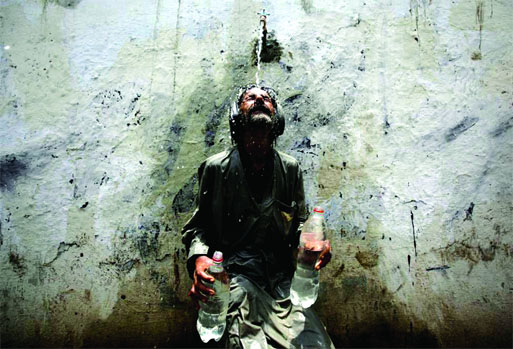 Pakistan's prime minister called for emergency measures as the death toll from a heatwave in southern Sindh province reached nearly 700.
The National Disaster Management Authority (NDMA) said it had received orders from Nawaz Sharif to take immediate action.
The army has also been deployed to set up heat stroke centres and assist the NDMA, it added.
Many of the victims are elderly people from low income families.
The death toll from the heatwave has risen above 450
Health officials say many deaths have been in the largest city, Karachi, which has experienced temperatures as high as 45C (113F) in recent days.Sindh province Health Secretary Saeed Mangnejo said that 612 people had died in the city's main government-run hospitals during the past four days. Another 80 are reported to have died in private hospitals.
Thousands more are being treated, and some of them are in serious condition.
The demand for electricity for air conditioning has coincided with increased power needs over Ramadan, when Muslims fast during daylight hours.
Hot weather is not unusual during summer months in Pakistan, but prolonged power cuts seem to have made matters worse, the BBC's Shahzeb Jillani reports.
Sporadic angry protests have taken place in parts of the city, with some people blaming the government and Karachi's main power utility, K-Electric, for failing to avoid deaths, our correspondent adds.
The prime minister had announced that there would be no electricity cuts but outages have increased since the start of Ramadan, he reports.
Pakistani papers come down hard on the authorities
"The blame is squarely on the shoulders of the government for its lacklustre performance in providing water and electricity," The Nation says bluntly, with the Daily Times agreeing that the prime minister now needs to take "some bold decisions".
"Our levels of preparedness are exposed as woefully inadequate," the Express Tribune declares, predicting that climate change will claim more lives in future.
The News points out that it is the poor who are the hardest hit: "The fact that we ignore poverty is one of the reasons we face the kind of crisis we are seeing nowâ¦ the need to solve the power shortages we face has become critical."
The Urdu-language paper Ummat accuses the Karachi water board of trying to cover up its "inefficiency and lethargy" by blaming K-Electric. "The matter won't be resolved by trading allegations."
The body's normal core temperature is 37-38C.
If it heats up to 39-40C, the brain tells the muscles to slow down and fatigue sets in. At 40-41C heat exhaustion is likely - and above 41C the body starts to shut down.
Chemical processes start to be affected, the cells inside the body deteriorate and there is a risk of multiple organ failure.
The body cannot even sweat at this point because blood flow to the skin stops, making it feel cold and clammy.
Heatstroke - which can occur at any temperature over 40C - requires professional medical help and if not treated immediately, chances of survival can be slim.
There are a number of things people can do to help themselves. These include:
Karachi resident Iqbal told the BBC on Monday that no-one in his family could go outside to work because of the temperature and that everyone in their area preferred to stay at home.
"In our area, there is no electricity [since the] morning. We have complained several times, but there is no response from K-Electric," he said.