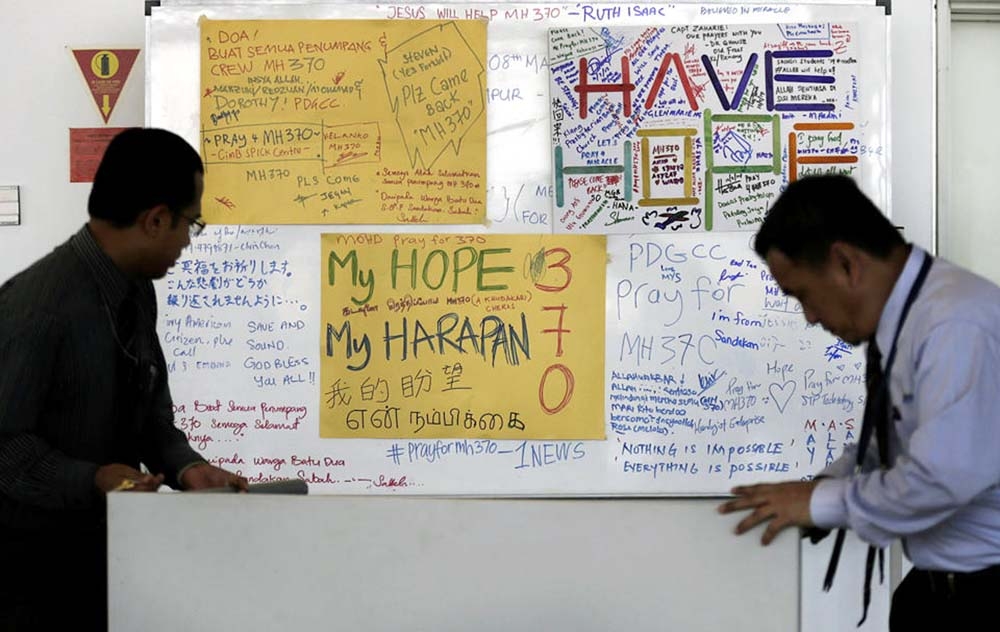 Airport staff move a white board plastered with messages of hope and encouragement to all involved with the missing Malaysia Airlines jet, MH370, at the Kuala Lumpur International Airport on Tuesday.

Authorities searching for the missing Malaysia Airlines plane have widened their search, amid increasing frustration from passengers' families.
Search teams had expanded their scope to the Straits of Malacca, Malaysia Airlines said.
The authorities are looking at a possibility of an attempt made by MH370 to turn back to Subang.
The Beijing-bound flight vanished on Saturday shortly after it left Kuala Lumpur. There were 239 people on board.
Authorities are also investigating two men who boarded the missing plane on Italian and Austrian passports stolen in Thailand years ago.
Malaysian police said one of the two had been identified as a 19-year-old Iranian man who they believe was hoping to settle in Germany and was not likely to belong to a terrorist group.
Experts say the presence of two passengers with stolen passports is a breach of security, but is relatively common in the region and could relate to illegal migration. In a statement, Malaysia Airlines said: "The search and rescue teams have expanded the scope beyond the flight path.
"All angles are being looked at. We are not ruling out any possibilities.
"Apart from the search in the sea, search on land in between these areas is also conducted," the airline added.
Rescue teams from several countries are scouring the seas for signs of the plane.
Malaysian civil aviation chief Azharuddin Abdul Rahman said that the search was continuing "on both sides" of the peninsula.
Malaysian authorities said late on Monday they were expanding the search area from 50 nautical miles from where the plane had disappeared - over waters between Malaysia and Vietnam - to 100 nautical miles (115 miles; 185km).
China's Xi'an Satellite Control Centre launched an emergency response and adjusted the operations of up to 10 orbiting satellites to help in the search, a website run by the People's Liberation Army said late on Monday.
Meanwhile, Boeing said that it had joined the US National Transportation Safety Board team as a technical adviser. The team has positioned a group of investigators and technical advisers in Asia to offer assistance.