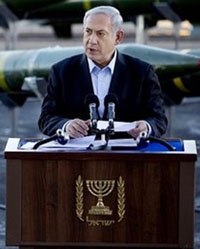 Israel's Prime Minister Benjamin Netanyahu has accused the international community of "hypocrisy" over Iran.
Mr Netanyahu spoke as the Israeli military unveiled what it alleged was a cache of Syrian-made weapons being sent by Iran to militants in the Gaza Strip.
He criticised EU foreign policy chief Catherine Ashton, who visited Tehran at the weekend, for her "smiles and handshakes" with Iran's leaders.
Iran has dismissed as "failed lies" the accusation it was behind the shipment.
A spokesman for Hamas, the militant Palestinian Islamist movement that governs Gaza, has meanwhile said it is all a "silly joke".
Israel's navy seized a Panamanian-flagged vessel, the Klos-C, in the Red Sea off Sudan last Wednesday, and said it was carrying dozens of M-302 rockets, which have a range of 150km to 200km (93-124 miles).
The weapons had been tracked for several months as they were flown from Damascus to Tehran and then taken to a port in southern Iran, it alleged. From there, it added, they were loaded on to the Klos-C, which sailed to Iraq, where containers of cement were added.
On Monday, Mr Netanyahu said the world's apparent decision to downplay the discovery in favour of seeking improved relations with Iran was "evidence of the era of hypocrisy in which we are living".
"The ship was organised by Iran, dispatched by Iran, financed by Iran. The missiles were loaded by Iran, in Iran," he added.