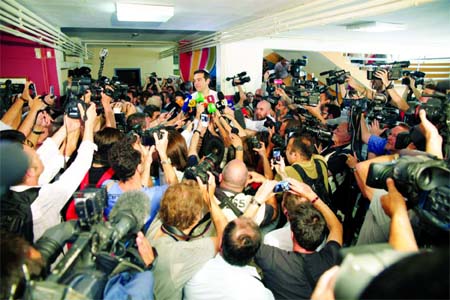 Greece\'s Prime Minister Alexis Tsipras, center, speaks to the media after voting at a polling station in Athens. Greeks began voting on Sunday in a closely-watched, closely-contested referendum, which the government pits as a choice over whether to defy

Greece's default stand off is taking the Eurozone on the brink risking the country to break apart from the single currency union forged in 1999. With a landslide 'no' to Eurozone's bailout scheme Greek voters have taken their country on a confrontational line with EU leaders saying they are not ready for painful austerity measures to bring out their coutry from bankruptcy. Greece may rather go to its individual currency if the EU leaders don't agree to release fresh loans to reopen Greece's banks in few days.
Greek Finance Minister Yanis Varoufakis on Monday has resigned, saying he was told after the Greek referendum result that the some eurozone finance ministers would prefer his absence from finance ministers meetings in Brussels.
To open new negotiations after the referendum Eurozone finance ministers say they expect to hear new proposals from Greece after the country voted to reject the terms of an international bailout.
Eurogroup President Jeroen Dijsselbloem described the referendum result as "very regrettable for the future of Greece.
European Central Bank (ECB) is to discuss whether to raise its emergency cash support for Greek banks, which are running out of funds and on the verge of collapse.
Global financial markets fears Greece is heading for an exit from the euro. German Chancellor Angela Merkel's spokesman Steffen Seibert said there was currently "no basis" for talks on a new bailout package and the ball was in Greece's court. "It is up to Greece to make something of this. We are waiting to see which proposals the Greek government makes to its European partners," he said.
European Commission vice-president for the euro, Valdis Dombrovskis, said the Greek government needed to be "responsible and honest" with its people about the potential consequences of the decisions it was facing.
"There is no easy way out of this crisis. Too much time and too many opportunities have been lost."
Greece's Economy Minister, Georgios Stathakis, told the BBC the ECB had to keep Greek banks alive for seven to 10 days so that negotiations could take place.
Greek Prime Minister Alexis Tsipras must open negotiation again with IMF and other creditors this week how to restructuring Greece's debt of more than â¬300bn (Â£213bn; $331bn). German Vice Chancellor Sigmar Gabriel warned that any unconditional debt write-off or "haircut" would destroy the single currency.
"How could we then refuse it to other member states? And what would it mean for the eurozone if we'd do it? It would blow the eurozone apart, for sure."
Greece had been locked in negotiations with its creditors for months when its leaders unexpectedly called a referendum on the terms it was being offered. Greece's last bailout expired on Tuesday and it missed a â¬1.6bn (Â£1.1bn) payment to the IMF.
The European Commission - one of the "troika" of creditors along with the IMF and the ECB - wanted Athens to raise taxes and slash welfare spending to meet its debt obligations. Greece's Syriza-led government, which was elected in January on an anti-austerity platform, said creditors had tried to use fear to put pressure on Greeks.
AP adds: Greece lurched into uncharted territory with the Sunday's referendum which rejected Eurozone bailout proposals. Results showed about 61 percent voted "no," compared with 39 percent for "yes," which is Greece's first in more than four decades.
It was a decisive victory for Prime Minister Alexis Tsipras, who had gambled the future of his 5-month-old coalition government in an all-or-nothing game of brinkmanship with Greece's creditors from other European countries comprising INF, European Central Bank and individual creditors. European officials and most of Greece's opposition parties said the referendum did not clear whether the country kept using the euro currency.Â  Opinion polls Friday showed that 74 percent or more want their country to remain in the euro.
Dijsselbloem, who is finance minister for the Netherlands, had been a steadfast opponent of Greece as it sought better conditions during five months of bailout talks. "For recovery of the Greek economy, difficult measures and reforms are inevitable," he said.
Sigmar Gabriel, Germany's vice chancellor and economic minister said the Greek government was leading its people "onto a path of bitter austerity and hopelessness."
Tsipras has "torn down the last bridges, across which Europe and Greece could move toward a compromise," Gabriel told the media. "By saying 'no' to the eurozone's rules, as is reflected in the majority 'no' vote, it's difficult to imagine negotiations over an aid package for billions."
Belgian Finance Minister Johan Van Overtveldt was somewhat softer in his reaction, saying a "no" result "complicates matters," but that the door was open to resume talks immediately.
"What we certainly don't want to do is to take decisions that will threaten the monetary union," he told Belgium's VRT. Time has run out for Greece, which is dealing with an economy in a protracted recession, with high unemployment and banks dangerously low on capital.
The international bailout - under which it received nearly 240 billion euros in rescue loans - expired last week, on the same day Greece defaulted on an IMF repayment, becoming the first developed nation to do so. Some analysts say Greece is so starved of cash that it could be forced to start issuing its own currency.
"This victory for the 'no' camp will embolden the government, but unlikely to convince the creditors that Tsipras is a trustworthy negotiating partner, said chief economist of Manulife Asset Management.
Yiannis Gkovesis, 26, waving a large Greek flag said "We don't want austerity measures anymore. This has been happening for the last five years and it has driven so many into poverty, we simply can't take any more austerity."Â  Opposition lawmaker Vangelis Meimarakis said he was expecting Prime Minister Tsipras to keep his pledgeÂ  for a quick deal. "If we don't have an agreement within 48 hours as the prime minister promised, then we are being led to a tragedy," he said.