They are in Eid play 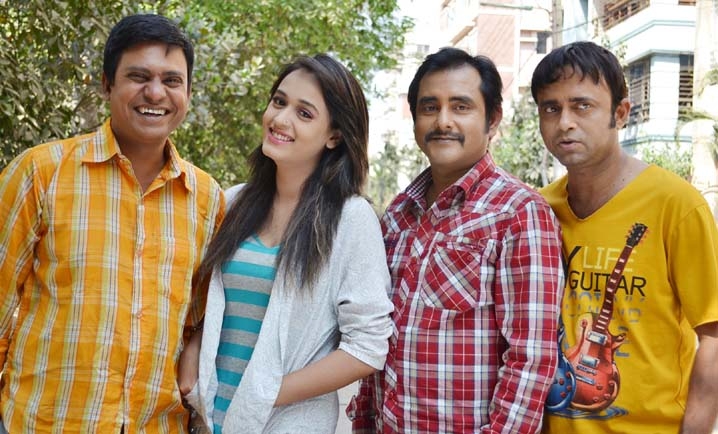 Joyraz, Ahona, Shamim Zaman and AKhM Hasan at a photo session in the shooting spot of play Ã¢â¬ËCitizen PatriÃ¢â¬â ¢ in Uttara on Tuesday

Title of the play is Citizen Patri. Zakir Hossain Uzzal has written its script, while it was directed by popular TV actor Shamim Zaman. Â
Shamim Zaman has made the play under the banner of own production house âSharat Telefilmâ on the occasion of upcoming Eid-ul-Fitr.
Shooting of the play was done at a shooting house in the cityâs Uttara area on March 7 and 8. Three friends - Mosaddek, Naser and Ramiz lost their all the properties to fall in love with a citizen bride named Naila.
Popular TV actress Ahona Rahman Lucky has performed in role of Naila. On the other hand, Shamim Zaman, Joyraz and AkhM Hasan performed in roles of three friends - Mosaddek, Naser and Ramiz respectively.
While talking about the play director and actor Shamim Zaman told this
correspondent, âWhen the Eid festival comes to close, not only engagement of the actors increases but also I have to be engage in this regard. For this reason, this year I have made the Eid play in earlier time. Viewers will get the similarity between the characters of the play Citizen Patri and real life. I think they (viewers) will also enjoy the play because everybody performed tremendously well.â
Actress Ahona shared her feelings by this way, âMy role in this play is different to others. It is a challenging character. I have worked very attentively in the play. Shamim bhai, Joyraz bhai and Hasan bhai - everybody cooperated me well.â
AKhM Hasan said, âIn this play, I talked in Sylhetâs regional language. We have enjoyed while taking part in shooting of the play.â
It may be mentioned that these four actor earlier performed together in several TV plays like Aamra Tinjon, Daktar Jamai, Tin Tala Tin Chabi, etc.
However, under the direction of Shamim Zaman a new drama serial titled Hatkhola will start on Banglavision soon, he said.
On the other hand, Ahona recently started to take part in shooting of new drama serial titled Palonko, while Joyraz also has started shooting of Masud Sezan directed drama serial Cholitechhe Circus. Mosharraf Karim, Jui Karim, Moutushi Biswas, among others, are acting with him in this serial.
However, Hasan acted drama serials - Poribar Kori Kolpona, Alaspur and Colour are being aired on NTV, RTV and SA TV now.Â Â