3 wheelers allowed on highways for 2 hours 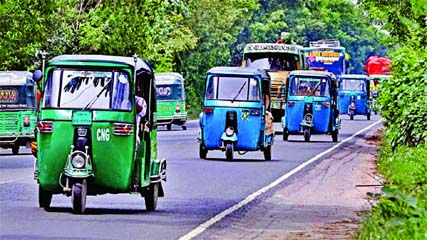 Three-wheelers will get a two-hour window on the national highways for refuelling, says the government.Auto-rickshaws, which are banned from highways, will be allowed to run from 6am to 8am, Road Transport and Bridges Minister Obaidul Quader said on Thursday. "The auto-rickshaws cannot carry passenger while they head for filling up gas," he told reporters in Comilla, where he went to see the work on upgrading of the Dhaka-Chittagong Highway to four lanes. Three-wheeler owners and drivers have been agitating since the ban came in force on Aug 1, often blocking highways across Bangladesh. One of the key points they raised was that most filling stations were on the highways.