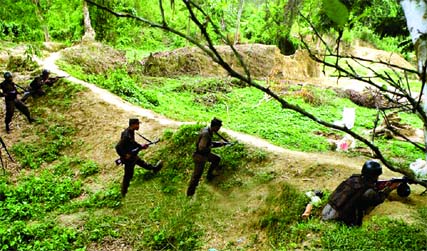 Border Guard Bangladesh (BGB) men traded gunfire with the members of Arakan Army, an insurgent group of Myanmar, at Baramadak in Thanchi Upazila under Bandarban district on Wednesday.

Staff Reporter :The joint force of Bangladesh Army and Border Guard Bangladesh [BGB] flashed out the guerilla operatives of Arakan Army and forced them to cross the border by demolishing their base camps in the country's southeastern hilly district of Bandarban on Wednesday."The situation is under our control. The members of army along with BGB men have started a massive combing operating in the remote areas of Bandarban to catch the attackers," Major General Aziz Ahmed, Director General of BGB, said yesterday evening after the operation. Official sources said the guerilla operatives of Arakan Army retreated through the narrow ways in the deep forest when the joint forces launched a full-scale military operation using heavy machine guns and high explosives under the cover of combat helicopters.Before the operation started, Bangladesh authorities informed the Myanmar government and its army to seal the border as none could cross the zero-line for shelter. At first, the members of Arakan Army tried to conduct counter attack defying the shelling of Bangladesh forces. But they started fleeing fighting an unequal fight for about five hours.Â Â Â Â  The joint force operation was prompted after two members of BGB were injured following an ambush attack by separatist guerillas of Myanmar's banned outfit Arakan Army near the international border at Barha Modak under Thanchi Upazila at around 9:30am yesterday.The attackers choose the time for ambush when a 10-member patrol team of BGB was crossing another 10-member patrol of the army in the area. The injured persons were identified as Sipahi Abdul Gani and Nayek Zakir Hossain of BGB. Both of them were sent to Combined Military Hospital in Chittagong. Sources said a fierce gun battle erupted between the two sides when BGB soldiers retaliated with heavy gunshots to come out from the ambush laid by the Arakan Army operatives in the remote hill. But several BGB men got trapped in the low land as the attackers continued shooting taking comparatively better position on the hilltop.Â Â Â  Â Being informed, two military choppers, one MI-17 and another Bell, carrying additional troopers of BGB along with a commando unit of army under 24 Infantry Division rushed to the spot to backup the trapped BGB men. Later, an airforce F-7 fighter started roaming over the area to give support to joint forces. Â Â "The firing ensued when activists of the separatists outfit attacked a BGB patrol.Â  The injured BGB men were rescued from the spot and additional BGB and army troops were sent by helicopter to conduct a coordinated operation against the terrorists," BGB DG said.He said, "There was no BoP. Some members of the patrol team were in the boats when the shooting began. The BGB men anchored the boats to the river bank. Nayek Zakir received bullet injuries in his hand when he was trying to take cover.""All the border outposts [BoPs] of BGB and army camps in the district have been brought under special protective measures where additional troop have also been deployed. More troops will be sent to Thanchi border tomorrow [Thursday]," he said.Â Â Â  Â Officials said the reason behind the gun attack might be linked with a BGB operation where they detained 14 foreign horses on Wednesday, which were imported by the Arakan Army for their use in transporting men and goods. The attack was conducted for taking revenge, they said.Meanwhile, vowing his government's determination to eliminate the Arakan Army, Home Minister Asaduzzaman Khan Kamal said, "We will conduct all sorts of operations, if needed, to curb down the activities of the Myanmar's banned outfit. We will take stringent measures as they couldn't get strength to occur such incident further in the future."According to officials, the incident was occurred at such a remote place where there is no government establishment, except some houses of indigenous people, in around 439 kilometers.Â  About 539 kilometers of bordering areas were unprotected since last year. The BGB, however, established its control in about 100 kilometers in the last one year. Recently, the BGB have conducted several operations against the Myanmar's separatist outfits, including Arakan Army.Â  In a such operation, the BGB sent back two abducted Myanmar army personnel after rescuing them from Bandarban. The Arakan Army is an Arakanese Buddhist rebel organization formed on 10 April, 2009. Their organization was fighting in the Kachin Conflict alongside the Kachin Independence Army against the Myanmar Armed Forces. The group to be based in the western Myanmar state of Arakan.Twan Mrat Naing is currently chief in command of Arakan Army. Nyo Twan Awng, the organization's second in command, stated that the organization's purpose is "to protect our Arakan people, and to establish peace and justice and freedom and development."