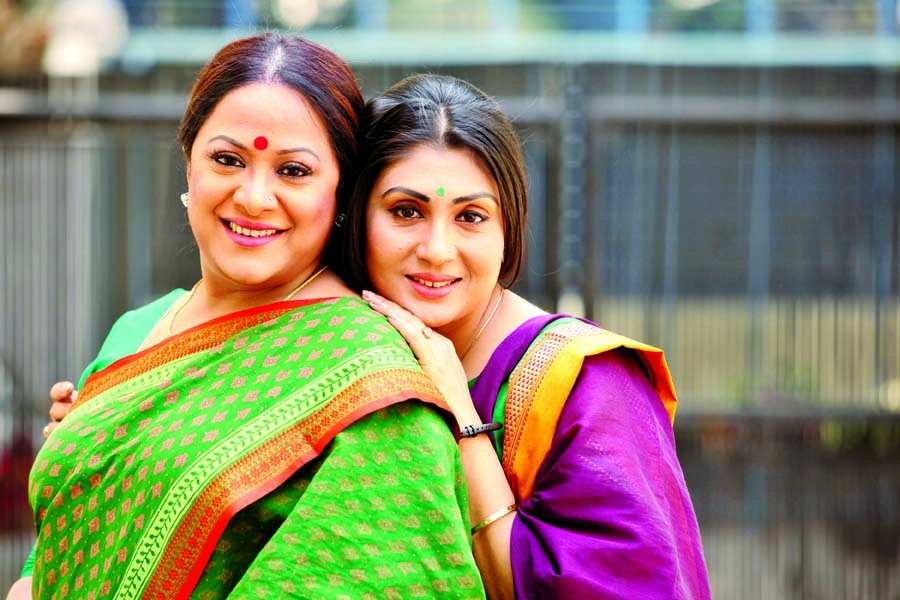 Once popular film actress of the countryâs film
industry Aruna Biswas, later became play director, returned to Bangladesh recently. After returning from Canada, she has been engaged with her
professional works.
Now she has been giving direction of TV plays
regularly. Already Aruna has finished works of
several TV plays.
Recently she came into limelight to give direction of a TV play titled Dui Prantor under the banner of her own production house, Jatra Vision. Aruna not only gave direction of play Dui Prantor but also wrote its script.
In this play, popular TV actress Bonnya Mirza has performed under the direction of Aruna Biswas. In fact, Bonnya performed in role of her husbandâs
second wife where Aruna acted in role of that
personâs first wife. Shahidul Alam Sachchu
also performed in role of their husband in the play.
While talking about the main story of the play actress and director Aruna Biswas told this correspondent, âThere is nothing big thing except love in everybodyâs life. Anybody can get relief or peace from something temporary thing. But when the human being starts to think from his/her inner soul, s/he can realise what he/she did wrong in life. When s/he can
realise this thing s/he can understand the essence of love.â
âIn the play Dui Prantor, Bonnya Mirza performed outstandingly well. In fact, I am really impressed with her performance in the play. Here one thing I want to mention that if I didnât get inspiration and cooperation from Faridur Reza Sagor bhai, I could not become a director. For this reason, I am really grateful to him,â said Aruna.
However Bonnya Mirza shared her feelings by this way, âIt was not only a love story. Anybody will like the story of the play. Its script was really nice. Overall, I have enjoyed performing in the play.â
The play Dui Prantor has been made to air on
Channel i. âThough I was earlier decided to perform in Nargis Akhter directed movie Joiboty Konnyar Mon, but now it can become impossible for me give time to perform in this movie,â Aruna said.
It may be mentioned that Aruna Biswas started her acting career on the screen by movie Chapa Dangar Bou, directed by Razzak. Later she performed in many movies those were directed by countryâs noted directors like Khan Ataur Rahman, Kamal Ahmed, Subhash Dutta, Dilip Biswas, Bulbul Ahmed, Chashi Nazrul Islam, among others.
Aruna Biswas directed first TV play was Lajja. It was made in 2007.
On the other hand, Bonnya Mirza is now passing her days taking part in shooting of several TV serials. Bonnya acted ongoing TV serials are: Pinjor,
Eleybeley, Andormohol, Sanghat, Chand-er Gari and Kebol-e Swapon Korechhi Bopon.
Besides her engagement in TV plays and serials, Bonnya recently finished shooting of a
government-grant movie titled Headmaster. Directed by Delwar Jahan Jhontu this movie is waiting to release soon, Bonnya said.Â Â