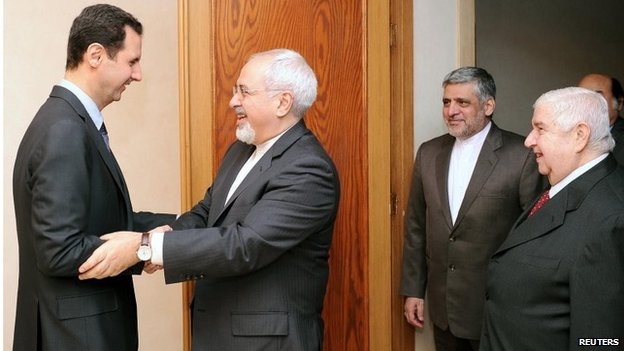 UN chief Ban Ki-moon has invited to take part in preliminary Syrian peace talks this week in , an offer has accepted.

Mr Ban said he had received assurances that would play a positive role in securing a transitional government.

But 's main opposition group said it would withdraw from the talks unless Mr Ban retracted the offer to .

And the said the offer must be conditional on 's support forÂ the 2012 deal on Syria's transition.

The preliminary talks will open in Montreux on Wednesday and then continue in two days later.

The three-year conflict in has claimed the lives of more than 100,000 people.

An estimated two million people have fled the country and some 6.5 million have been internally displaced.

On Sunday, UN Secretary General Ban said that 's Foreign Minister Mohammad Javad Zarif had pledged that would play "a positive and constructive" role in Montreux.

"As I have said repeatedly, I believe strongly that needs to be part of the solution to the Syrian crisis," he added.

And Mr Ban stressed: "Let me be clear - Montreux is not a venue for negotiations. The Syrian parties themselves will begin that process in on 24 January."

Shortly afterwards, said it accepted the invitation. had earlier insisted it wanted to take part but without preconditions.

There had been a dispute over whether , a crucial ally of Syrian President Bashar al-Assad, should be taking part in the talks.

The UN and had advocated a role for , but the had reservations because of its failure to endorse the 2012 communique, detailing 's political transition process.

is also concerned about 's deployment of military personnel in , and its support of 's Hezbollah movement, which had sent fighters to bolster Mr Assad's forces.

In a tweet,Â SNC spokesman Louay Safi wrote: "The Syrian Coalition announces that they will withdraw their attendance in G2 unless Ban Ki-moon retracts 's invitation."

In a statement,Â  State Department spokeswoman Jen Psaki said viewed Mr Ban's invitation "as conditioned on 's explicit and public support for the full implementation of the communique including the establishment of a transitional governing body by mutual consent with full executive authorities.

"This is something has never done publicly and something we have long made clear is required," Ms Psaki added.

"We also remain deeply concerned about 's contributions to the Assad regime's brutal campaign against its own people, which has contributed to the growth of extremism and instability in the region.

"If does not fully and publicly accept the communiquÃ©, the invitation must be rescinded."

has been devastated by the conflict which began in March 2011

The SNC had only agreed to attend the talks two days ago.

The coalition's leader, Ahmad Jarba, said on Saturday that the SNC was going to the talks "without any bargain regarding the principles of the revolution and we will not be cheated by Assad's regime".

"The negotiating table for us is a track toward achieving the demands of the revolution - at the top of them, removing the butcher from power," he added.

US Secretary of State John Kerry welcomed the decision.

"This is a courageous vote in the interests of all the Syrian people who have suffered so horribly under the brutality of the Assad regime and a civil war without end," he said in a statement.

UK Foreign Secretary William Hague also praised the SNC's "difficult decision", adding: "As I have said many times, any mutually agreed settlement means that Assad can play no role in Syria's future."

Syrian opposition figures had earlier expressed reluctance to go to unless President Assad was excluded from any future transitional government.

says there cannot be any pre-conditions for the talks.