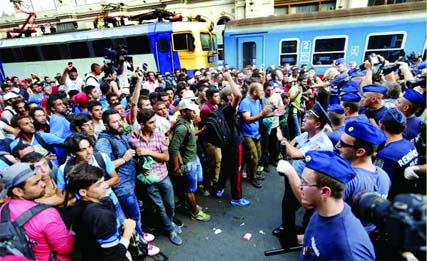 Hundreds of migrants have protested for a second day at Hungary's decision to prevent them from travelling on towards Germany and other EU countries.They are among 2,000 people camped at Budapest's Keleti train station, having bought tickets for onward journeys.Meanwhile, more than 4,000 migrants arrived in mainland Greece from the island of Lesbos overnight.The EU is struggling to deal with the largest number of refugees on the move since the end of World War Two.Some 2,000 migrants camped overnight at Keleti station in east Budapest, having been prevented from boarding trains on Tuesday.They had bought tickets after Hungary appeared to abandon efforts on Monday to register migrants, allowing huge numbers to board trains to Vienna and southern Germany.Hungary gave little detail on its apparent U-turn, except to say it was trying to fulfil its obligations as an EU member to uphold border controls.Hundreds of migrants again protested on Wednesday morning, chanting "Freedom, freedom" and waving train tickets, complaining they had paid hundreds of euros for the onward journeys.Journalists at the scene said tensions were high as the migrants faced off with riot police.The stalemate around Keleti station continues. Many families are trying to decide what to do now. Everyone is asking each other the same question - will they be allowed to carry on their journeys or are they stuck here until their money runs out?Lines of police are currently blocking the entrance to the station. People are very frustrated and very angry.I was talking to two Syrian girls who said they hadn't washed for days. They said the Hungarians looked down on them, and that hotels and restaurants around the station were increasingly not allowing them in. They feel very humiliated by the situation. Prime Minister Viktor Orban is due to meet EU chiefs on Thursday to discuss Hungary's handling of the crisis.Under an EU rule known as the Dublin Regulation, refugees should seek asylum in the first EU country they enter.But this has proved hard to uphold with border countries such as Hungary, Italy and Greece saying they cannot cope with the numbers that have been arriving.The German government has already said it will allow Syrians arriving from other EU states to apply for asylum. But on Tuesday, a spokesman said the Dublin Regulation had not been suspended."Dublin rules are still valid and we expect European member states to stick to them," an interior ministry spokesman said.Greece saw the arrival of 23,000 migrants last week alone, said the EU's border control agency Frontex - an increase of 50% on the previous week.Many of those arriving in the country do so on the island of Lesbos, where, according to the Kathimerini newspaper, 17,500 migrants were registered in the last week. Some 4,200 migrants were brought from Lesbos to the port of Pireaus, near Athens overnight.One of the passengers, a Syrian teacher named Isham, told Reuters news agency: "You have to help us. We are human."Greece's government says it lacks the resources to look after so many arrivals, but aid groups say the authorities should be doing more.On Tuesday, Greek President Prokopis Pavlopoulos called his French counterpart Francois Hollande and asked that the situation facing Greece be discussed at a senior European level.Greece's caretaker cabinet is set to convene to discuss the issue later on Wednesday.The word migrant is defined in the Oxford English Dictionary as "one who moves, either temporarily or permanently, from one place, area, or country of residence to another".A refugee is, according to the 1951 Refugee Convention, any person who "owing to a well-founded fear" of persecution is outside their country of nationality and "unable" or "unwilling" to seek the protection of that country. To gain the status, one has to go through the legal process of claiming asylum.The word migrant has traditionally been considered a neutral term, but some criticise the BBC and other media for using a word they say implies something voluntary, and should not be applied to people fleeing danger.The number of migrants entering Europe has reached record levels, with 107,500 arriving in July alone.Germany expects to take in 800,000 migrants this year - four times last year's total.The risks for migrants travelling through Europe were highlighted last week by the deaths of 71 people found in a lorry that had travelled to Austria from Budapest.EU interior and justice ministers will meet in Brussels on 14 September to address the crisis.