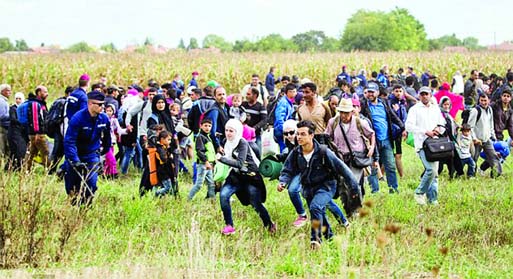 Several hundred migrants who fled after being angered by Hungarian policetreatment. Internet photo

European Commission President Jean-Claude Juncker has announced plans that he says will offer a "swift, determined and comprehensive" response to Europe's migrant crisis.Under the proposals, 120,000 additional asylum seekers will be distributed among EU nations, with binding quotas.It comes after a surge of thousands of mainly Syrian migrants pushed north through Europe in recent days.Mr Juncker told the European Parliament it was "not a time to take fright".Germany, the main destination for many migrants, supports quotas, but some EU countries oppose a compulsory system.Mr Juncker's plans were set out in a "state of the union" annual address in which he outlined the priorities of the European Commission.He opened his speech by admitting the European Union was "not in a good situation. There is a lack of Europe in this union, and a lack of union in this union".He said tackling the crisis was "a matter of humanity and human dignity. It is true that Europe cannot house all the misery in the world. But we have to put it into perspective."This still represents just 0.11% of the EU population. In Lebanon refugees represent 25% of the population."The mass migration has seen those seeking an end to persecution, conflict and hardship travel from Turkey across the sea to Greece, through Macedonia and Serbia, and then to Hungary from where they aim to reach Austria, Germany and Sweden.On Wednesday, Denmark suspended some rail links with Germany and shut a section of motorway after migrants crossed the border and began walking north, apparently trying to reach Sweden.In southern Hungary, migrants on the border with Serbia broke through police lines at the Roszke camp, forcing the closure of the M5 highway."It's 160,000 refugees in total that Europeans have to take into their arms and I really hope that this time everyone will be on board - no rhetoric, action is what is needed," he told MEPs.The new plans would relocate 60% of those now in Italy, Greece and Hungary to Germany, France and Spain.The numbers allocated to each country would depend on GDP, population, unemployment rate and asylum applications already processed. Countries refusing to take in migrants could face financial penalties.Spain on Wednesday said it would accept a quota of almost 15,000 extra migrants migrants set by EU.However Mr Juncker's proposals received a sceptical response from Czech Prime Minister Bohuslav Sobotka, who said: "The compulsory quotas are not a good solution."The Czech Republic, Slovakia, Poland and Romania have opposed the idea - though Poland has agreed to accept more migrants than first stated.France welcomed the first of 1,000 migrants it has pledged to take from Germany, having committed to receive 24,000 migrants over two years.In a separate development Australia has announced plans to take in 12,000 Syrian refugees.Germany has welcomed Syrian migrants, waiving EU rules and saying it expects to deal with 800,000 asylum seekers this year alone - though not all will qualify as refugees and some will be sent back.German Chancellor Angela Merkel said on Wednesday that Germany needed to learn from its mistakes in labelling incomers in the post-war period as "Gastarbeiter" or "guest workers" - with the implication that they were not permanent residents. Many of the refugees it expects in future "will become new citizens of our country", she said.