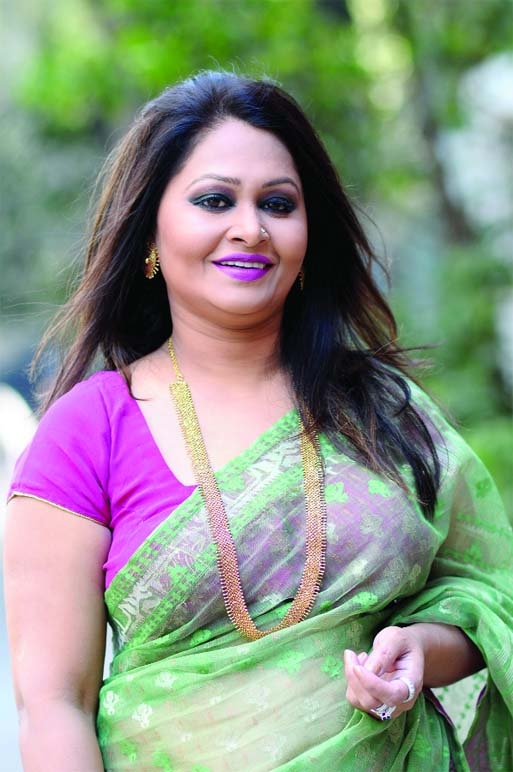 Noted theatre and TV actress Jayosree Kar Jaya doesnât like to perform in so many plays at a time. For this reason, she doesnât appear on the screen freequently now. But in those plays where she performs those come into discussion.
Among new works of Jayaâs, Shahadat Hossain Sujon directed daily soap titled Shodh is being aired on GTV now. This daily soap is not being aired on the channel due to ongoing T20 World Cup Cricket.
In the daily soap Shodh, Jaya is acting in role of âFerdousiâ who is elder daughter-in-law in a family. Arman Parvez Murad is acting in role of her husband in the daily soap. However, Jayosree Kar has also finished work of Mokaddem Morshed directed a new faction play titled Pholaphol Sundor Ekta Bou. She performed in role of Sajalâs elder sister in the play.
While talking about her recent performance Jayosree Kar Jaya told this correspondent, âIt can be said that I world very little bit now. Because when I work in any play I always keep my total concentration on that work. For this reason, I always work very attentively while taking part in shooting of any play. My role in daily soap Shodh is very challenging, while my other role in the faction play was very significant.â
Today is birthday of Jayosree Kar Jaya. She always tries to celebrate her birthday with homely arrangement. But two days ago, her husband noted actor and present Managing Director of Bangladesh Film Development Corporation (BFDC) Pijush Bandyopaddhyay went to Germany on an official tour. For this reason, this year she doesn't have any special arrangement to celebrate her birthday.
It may be mentioned that Jayosree Kar Jaya started her acting career by Chittagong based thetare troupe âArindom Thetare.â Under this theatre troupe she performed in stage plays like Laal Shalu, Paap Punnyo, Eley Beley and Tora Shob Joyoddhwoni Kor.
In 1994, Jaya came into Dhaka and enlisted her name in Bangladesh Television as an actress. She first acted in TV play titled Ghotonar Por against Khaled Khan under the production of Alauddin Ali.
But Jaya came into limelight performing in lead role in late Abdullah Al Mamun directed once popular drama serial titledÂ  Jowar Bhata. Though after coming to Dhaka she attached with Natyokendro and later Dhaka Theatre now Jaya is regularly performing in theatre play titled Bideho under the direction of Lucky Enam and production of Bangladesh Shilpakala Academy. Â
Jayosree Kar Jaya acted first movie was Matin Rahman directed Wrong Number. Later she performed in Nasir Uddin Yusuff directed movie Guerrilla and Saniyat Hossain directed movie Olpo Olpo Prem-er Golpo. Many years ago she worked in a television commercial under the direction of Ja Nesar Osman.Â Â Â Â Â Â Â