Romana-Apurbo-Emi together for first time 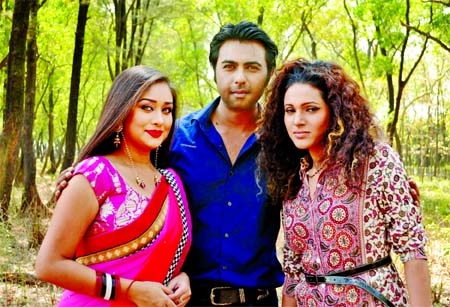 Once popular TV actor and model Apurbo worked together with the countryâs leading ramp model cum TV actress Emi on ramp. But they didnât had experience to work together in any TV play.
For the first time, they performed together in a TV play. National Film Award winner actress Romana has also performed with them in same play. With these popular performers a TV play titled Drishhsyo Bhrom has been made recently.
Thought story of the play is based on a triangular love story, there is exceptionality in the script of the play. It will go on air in any satellite channel soon, said its director BU Shuvo. Gazi Mamun has given the main concept of the play.
Romana, Apurbo and Emi performed in roles of Mohini, Ratul and Isha respectively in the play.
When photographer Mohsin Ahmed Kawsar was taking snaps of Romana, Apurbo and Emi, they were looking very excited because for the first time they were in taking into a frame together.
While talking with Apurbo he told this correspondent, âEarlier I had worked with Romana in many plays. She can easily introduce herself with her role in the play while taking part in shooting. She is very jolly-minded actress by whom nobody finds unhappy to work with Romana on the shooting spot. She always makes happy the members of the shooting unit where she works. However, it was my first work with Emi in TV play. She also performed well.â
Romana shared her feelings by this way, âWhen I work in any new telefilm or TV play I always think that I am going to work in a new world, and is also going to take new challenge. I believe that viewers will enjoy this work of mine along with Apurbo and Emi.â
âThough I had introducing with Apurbo and Romana earlier, it was my first work with them in any TV play. I have enjoyed a lot working in the play,â Emi shared her feelings while talking about the play.
It may be mentioned that Emi earlier worked under the direction of BU Shuvo in a TV play titled Chotushkone against Anisur Rahman Milon.
On the other hand, Apurbo acted first movie Gangster Returns is set to be released in May. Popular ramp model Peya performed against him in this movie. n