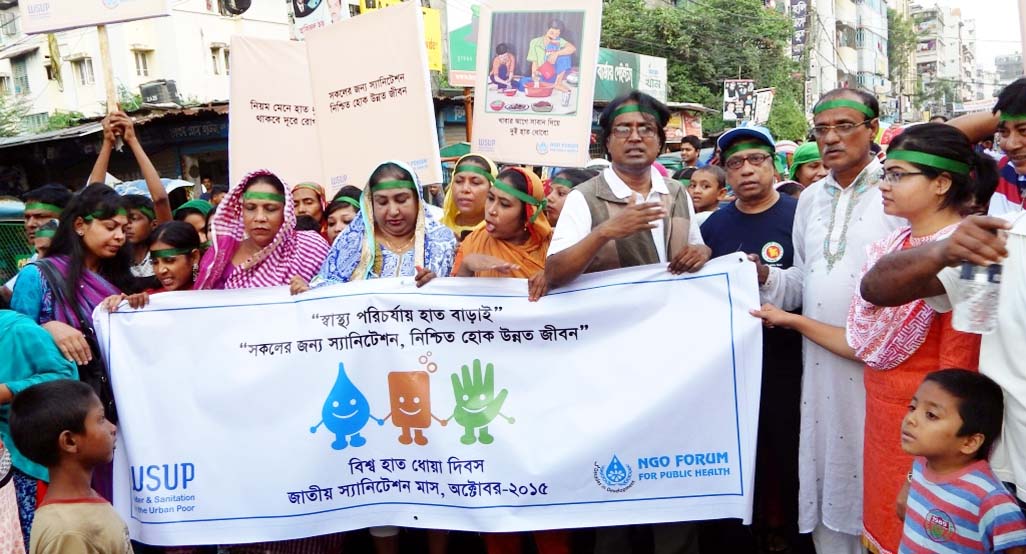 Different organisations including NGO Forum for Public Health brought out a rally in the city on Thursday marking Global Hand Washing Day.

City Desk :
Coordinated initiatives by different Government and Non-Government institutions required for Dhaka City's 45 lakh slum dwellers.
Â "Sanitation for all - ensuring better life and raise a hand for Hygiene" keeping this message in mind, NGO Forum for Public Health and WSUP Bangladesh is celebrating National Sanitation Month and Global Hand Washing Day - 2015. In order to mark the occasion, a grand rally was held at Duaripara, Mirpur, Dhaka at 03:30 p.m. with the participation of the slum dwellers, who are living in the most hazardous conditions in Dhaka City. The event was also marked by a mass gathering and cultural programme where awareness raising messages were voiced.
The Project Manager of Bangladesh LIC WaSH Project, M Nurun Nabi said at the gathering that our Prime Minister has recently been awarded "Champions of The Earth" by the United Nation, which is the highest award for environmental achievement. At this time in the history of the country it is imperative that we ensure safe sanitation and hygiene for each and every citizen of our country.
In this regard, special emphasis has to be given for the highly vulnerable urban slum dwellers.
Abdus Shaheen, The Country Programme Manager of WSUP Bangladesh said during his speech that with the assistance of NGO Forum, WSUP Bangladesh is continuing to work for the betterment of the Water and Sanitation situation of Dhaka City's Low income People.
We have been receiving Dhaka WASA's full cooperation along with the cooperation of the Community people.
S. M. A. Rashid, the Executive Director of NGO Forum for Public Health said in his speech that NGO Forum has been striving since the liberation of Bangladesh for upgrading marginalized people's living condition by providing Safe Water, Sanitation, and Hygiene practice support. At present we are working for the betterment of 03 lac Slum dwelling people of Dhaka City.
However, it is very important to have a coordinated effort by Government and Non-Government institutions for Dhaka City's 45 lac slum dwellers.