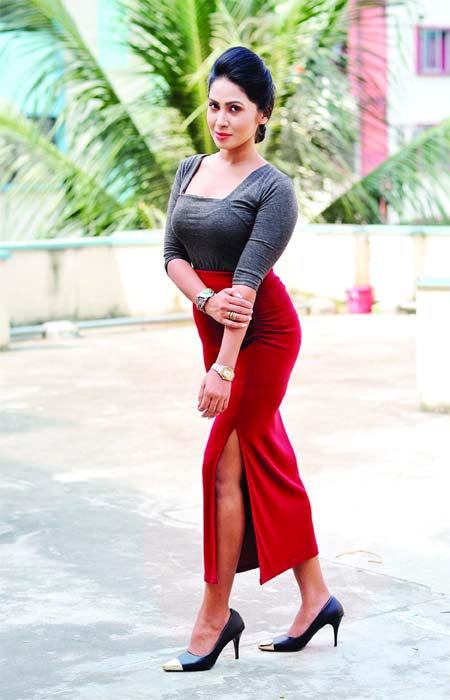 Sheikh Arif Bulbon :A new face of the big screen Alisha Pradhan is going to appear in front of the viewers by late filmmaker Chashi Nazrul Islamâs movie Antorongo. Earlier Alisha won the hearts of many viewers to perform as a model in TV commercials and also acted in several plays and telefilms for the first time she is going to debut her career in big screen by Chashi Nazrulâs movie.Alisha mentioned it as âfire examination.â She said, âIf the viewers positively take me in my first released movie I shall become regular in acting in big screen otherwise I want to set up a film studio. And that will be made only to fulfill own liking and commercial purposes.âIn Antorongo, Alisha acted in a duet role. Emon acted against her in the movie. The movie is expected to release on November 6 from 80 and 100 cinema halls across the country at a time. While sharing her feelings about her performance in movie Antorongo and also talked about late director Chashi Nazrul Islam Alisha Pradhan told this correspondent, âBefore presenting myself as a film actress I had tried to present properly to the viewers as a TV actor and model in the small screen. After seeing me Chashi Bhai liked me and later he took me to perform in his directed movie. I had a nice relationship with him. I always miss him every moment. Though he is not alive today but he will still remain among us by his works. To pray tribute to him, I request the viewers to watch Antorongo. I strongly believe that viewers will enjoy watching his movie.âIt may be mentioned that in 2008, Alisha Pradhan debuted her career in media to perform as a model in a TV commercial of Toba Chocolate. Later, in 2010 and 2012, she performed as a model against film actors Riaz and Emon respectively in TV commercials of Uro Cola. She has already acted in 12 to 14 plays.Â