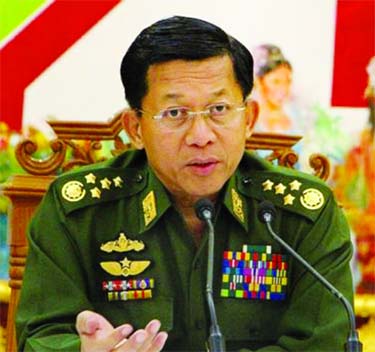 Myanmar's military chief has pledged to work with the country's new government, following landmark elections on Sunday.Min Aung Hlaing said the military would "do what is best in co-operation with the new government during the MilitaryAung San Suu Kyi's National League for Democracy is on track for a majority, taking about 80% of declared seats.But a quarter of parliamentary seats are allocated to the military, meaning it will remain hugely influential.Last weekend's vote was Myanmar's first openly contested general election for 25 years.The NLD won elections decisively in 1990 - only for the result to be nullified and Ms Suu Kyi placed under long-term house arrest.President Thein Sein and Min Aung Hlaing have congratulated Ms Suu Kyi on her party's performance in the polls, though have not formally conceded defeat. They have agreed to hold talks on national reconciliation with her after the final results are announced.More than 47% of results have been declared so far, and on Thursday morning, the NLD were said to be 38 seats short of a majority. The ruling military-backed Union Solidarity Development Party (USDP) - which won the last, widely criticised election five years ago - has so far gained about 5% of the seats being contested in Myanmar, also known as Burma.US President Barack Obama called Myanmar's President Thein Sein on Thursday to congratulate him and the country on "a historic free and fair general election", government spokesman U Ye Htut has said. "And second he also wants to congratulate the NLD for their success in the election," U Ye Htut told the BBC.President Thein Sein has also pledged that his government "will respect the people's decision and choice and will hand over power as scheduled".