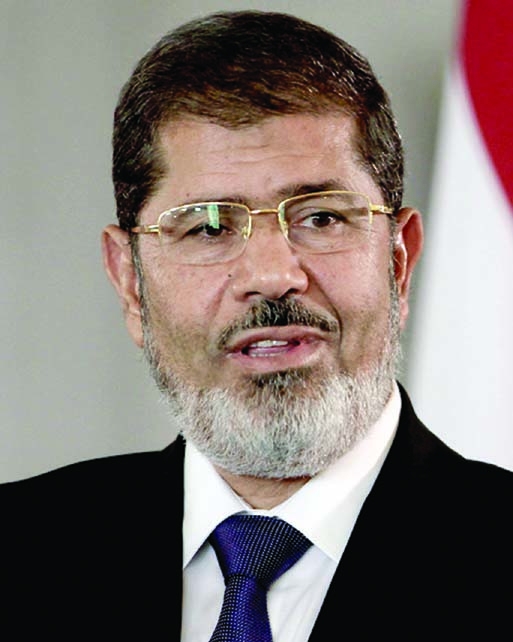 A court in Egypt has sentenced to death 529 supporters of ousted Islamist President Mohammed Mursi.
They were convicted of charges including murdering a policeman and attacks on people and property.
The group is among over 1,200 supporters of Mursi on trial, including senior Brotherhood members.
Authorities have cracked down harshly on Islamists since Mursi was removed by the military in July. Hundreds have been killed and thousands arrested.
They are expected to appeal.
The verdict now goes to Egypt's supreme religious authority, the Grand Mufti (a senior Islamic scholar), for approval or rejection, says the BBC's Orla Guerin in Cairo.
Campaigners say that while death sentences are often handed down in Egypt, few have been carried out in recent years.
The final trial session will not be held until 28 April. so there is some time left before the sentence is confirmed and there will be time to appeal in that period, our correspondent adds.
The Muslim Brotherhood's spokesman in London, Abdullah el-Haddad, told the BBC the sentence showed that Egypt was now a dictatorship.
"It may be just a threat message and there will be appeals to the court and the decision of the court will change, but this is the new Egypt after the coup. This is the new dictatorship that [army chief and defence minister Field Marshal] Abdul Fattah al-Sisi is trying to establish."
Haddad said the Muslim Brotherhood's general guide Mohammed Badie was among those convicted, though other reports say Badie is only due in court on Tuesday.
The court in Minya, south of the capital, Cairo, issued its ruling after only two sessions in which the defendants' lawyers complained they had no chance to present their case.
Lawyers have accused the presiding judge of "veering away from all legal norms" and denying justice to the accused, our correspondent adds.
They were convicted, among other charges, of the murder of the deputy commander of the Matay district police station in Minya.
More than 150 suspects were in court for the trial - the others were convicted in absentia, reports say.
The court also acquitted 16 other defendants.
The attacks took place in August after security forces broke up two camps of pro-Mursi supporters in Cairo, killing hundreds of people.
There has since been a severe crackdown on his Muslim Brotherhood group, as well as on other activists seen as hostile to the military-backed interim government.
The Brotherhood has been declared a terrorist organisation and authorities have punished any public show of support for it. A second group of 700 Mursi supporters is due to go on trial on Tuesday.