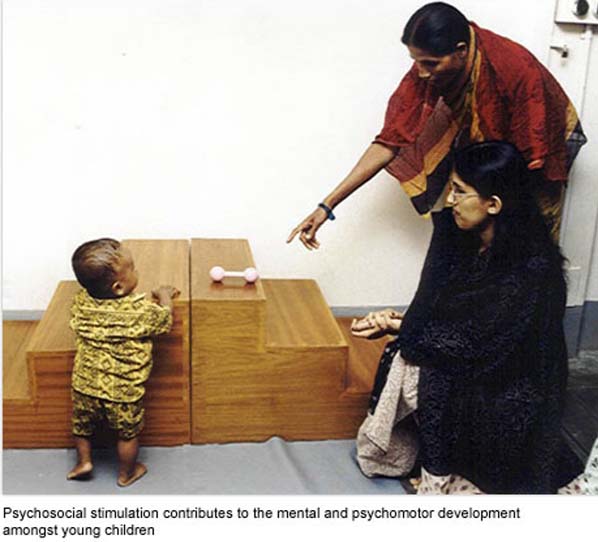 Almost 60% of children in Bangladesh are at risk of poor physical and mental development due to low body weight (22%) and under- nutrition (41%), poverty and sub-optimal stimulation due to low parenting knowledge. The mother is usually the key childcare provider, and her physical and mental health is a major predictor of child development, particularly in low-and middle-income countries such as Bangladesh.
A major focus of icddr,b's research and humanitarian services has been on the holistic approach to the well-being of children -their mental and physical growth in relation to the over-all health status of both mother and child.
now, icddr,b has received a grant award and nomination from Grand Challenges Canada (GCC), funded by the Government of Canada, to undertake two bold and creative projects aimed at improving the early brain development of children in Bangladesh.
A total of 14 projects have received grants under GCC's Saving Brains programme : five in Africa, six in Asia and three in Latin America and the Caribbean, icddr,b secured a seed grant of CAD$270,000 to enlist home-based community workers from health clinics in rural Bangladesh to offer a first-ever combined intervention.
It includes a) a Thinking Healthy programme for mothers, of children six to 12 month of age, with depressive symptoms and b) psychosocial stimulation (that contributes to mental and psychomotor development) for their children, icddr,b will collaborate with the University of the West Indies and the Institute for Child Health at University College in the UK for this projects.
icddr,bÂ  also has been nominated for a scale-up grant of up to CAD$2 million to improve development of malnourished children in Bangladesh through nutrition and psychosocial stimulation. This project will promote early cognitive development among 3,000 malnourished children visiting health clinics in rural Bangladesh.
The larger grant seeks to improve the knowledge and skills of both mothers and field staff in early cognitive development. Researchers expect that language skills among children will improve, along with mental and psychomotor development.
-icddr.b