Greece under EU pressure over migration 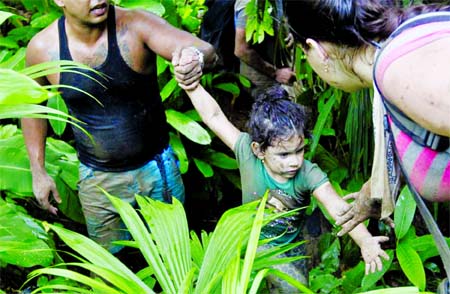 Cuban migrants help a child as they walk down crossing the border from Colombia through the jungle into La Miel, in the province of Guna Yala, Panama, Internet photo

Greece has admitted it has come under intense pressure over migration, but denies any official attempt has been made to suspend it from the Schengen passport-free zone.Migration minister Ioannis Mouzalas was reacting to reports of an EU ultimatum to improve migrant conditions.More than 740,000 people have arrived on the shores of Greece this year.A top EU official has warned that children areÂ Â  dying on Greek beaches because of a lack of medical help.There is also anger that Greece has been slow to let in EU experts and improve its registration of refugees.The influx of migrants across countries with few border restrictions has alarmed European leaders and raised doubts about the very future of the 1985 Schengen accord.According to the FT, Greece has been repeatedly warned this week that it could be suspended from the 26-member zone if it fails to take action before an EU leaders' summit in mid-December.Separately, unnamed officials in Brussels have said that Greece's suspension has been discussed in recent days in an attempt to persuade the Athens government to improve its handling of migrants and refugees. But several diplomats told Reuters that there had been no formal discussion by EU governments. Greece is not only struggling to cope with the numbers of people arriving on the islands closest to Turkey such as Lesbos, but thousands of people are camped on the northern border with Macedonia, which has erected a fence to stop people crossing.Greece's EU partners are frustrated that the Athens government has been slow to accept offers of help from the border agency, Frontex, to better manage its sea border. The offer is particularly sensitive in Greece because of concerns over its national sovereignty.Mr Mouzalas acknowledged that several EU states had been pressing Greece because they "mistakenly" thought that the influx of migrants could be controlled there rather than in Turkey. "It is not said officially, but there is pressure," he told reporters.Child deaths on LesbosSlovak Prime Minister Robert Fico has pushed for Greece's expulsion from Schengen, arguing that the move has widespread but behind-the-scenes support in the EU."We just cannot put up with a member country that has openly given up on safeguarding the Schengen area borders. Then Schengen is of no use."The plight of migrants and refugees arriving in Greece was laid bare in a letter by European Health Commissioner Vytenis Andriukaitis, who visited Lesbos on 19 November and watched a small boat arrive packed with babies, women and young children - many of them ill or wounded."There was nowhere to examine or treat them; no equipment no medical staff other than an overwhelmed voluntary doctor from an NGO in a muddy shed," he wrote, in a letter leaked to Belgium's French-language Le Soir newspaper.Mr Andriukaitis said three young children who had arrived on the same beach had died of hypothermia in a matter of days."This is unacceptable," he said. "There was no sign of the European Union and people were asking when the EU would come, when will you help us."While suspension from the Schengen accord would directly affect Greeks travelling to the 25 other members of the passport-free zone, it is unclear what effect it would have on the migrant crisis.None of the Balkan countries on the migrant route between Greece and Hungary are part of Schengen.Greek businesses are becoming increasingly concerned by the crisis on the Macedonian border because protests on the railway line have halted rail traffic.