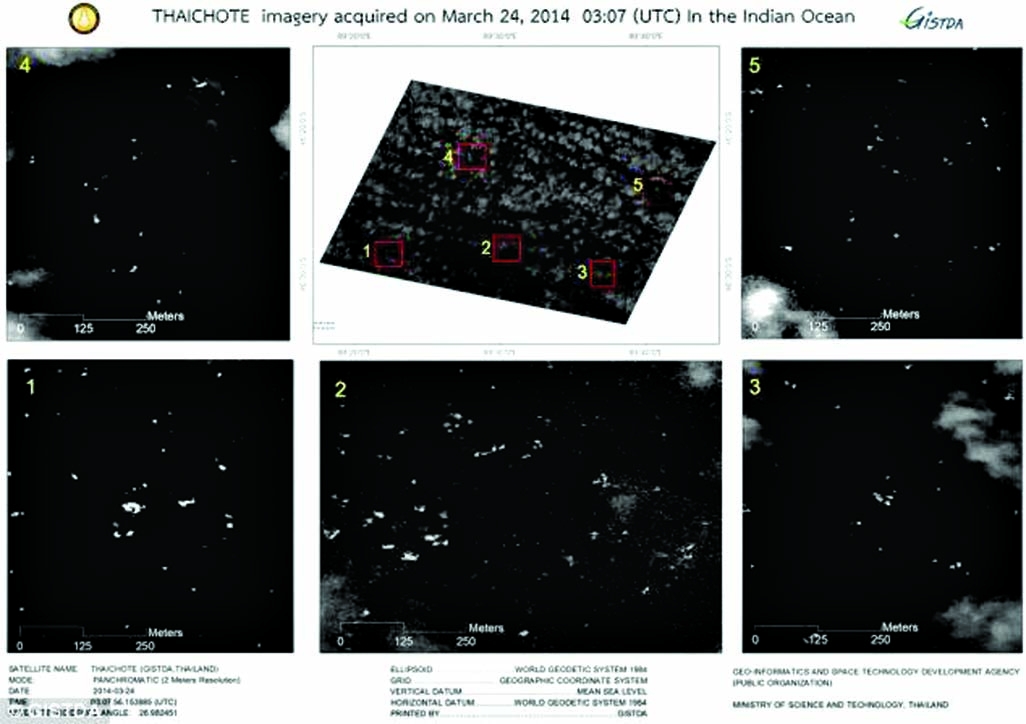 The images from Thailand are the fifth set from satellites to show potential debris from flight MH370 in the remote part of the Indian Ocean.

A Thai satellite has detected some 300 objects in an area of the southern Indian Ocean being searched for missing Malaysia Airlines flight MH370.
The images were taken by the Thaichote satellite on 24 March, a day after images from a French satellite purported to show 122 floating objects.
Flight MH370 disappeared on 8 March with 239 people on board. No debris has been recovered from the ocean so far.
Searches by planes were suspended on Thursday because of poor visibility.
Ships are trying to continue the operation despite the bad weather, Australian officials said.
The latest Thai images were carried in The Nation and were said to show some 300 floating objects scattered over an area about 2,700km (1,680 miles) south-west of Perth.
The objects were about 200km (120 miles) from the site of the French satellite images.Â Â Â Â Â Â  Â
The newspaper quoted officials as saying the information had been passed on to the Malaysian team involved in the search.
Anond Snidvongs, of Thailand's Geo-Informatics and Space Technology Development Agency, told the BBC the objects ranged from 2m to 15m (6.5ft to 50ft) in size.
He said he could not confirm they were debris from the plane.
The French images showed objects up to 23m (75ft) in length and were the first to suggest a debris field rather than just isolated objects. They had been described as the most credible lead so far.
The BBC's Paul Adams, in Kuala Lumpur, says the latest image forms part of a growing body of circumstantial evidence suggesting that it is in this inhospitable part of the Indian Ocean where the flight of MH370 came to an end.
The Thaichote is Thailand's Earth observation mission and was launched in 2008.
Malaysia said on Monday that fresh analysis of satellite signals had shown that the plane had gone down in the southern Indian Ocean, with no survivors.
BBC's Jonathan Head: "Experts are saying this is probably the most difficult search in modern aviation history".
The plane had been en route from Kuala Lumpur to Beijing when it disappeared from air traffic controllers' screens over the South China Sea.
The search is being coordinated by the Australian Maritime Safety Authority (Amsa).
It said that aircraft had spotted three objects on Wednesday but despite several passes had not been able to relocate them.
Eleven planes were sent out again on Thursday.
However, Amsa later tweeted: "Update: Ships staying in search area & will attempt to continue searching but all planes returning. Bad weather expected for next 24 hours."
Amsa spokesman Sam Cardwell said eight of the 11 planes had reached the search zone and looked for about two hours before the suspension.
He said: "They got a bit of time in, but it was not useful because there was no visibility."
Lt Cmdr Adam Schantz, in charge of the US Navy's Poseidon P8 plane, said: "The forecast in the area was calling for severe icing, severe turbulence and near-zero visibility. Anybody who's out there is coming home and all additional sorties from here are cancelled."
It is the second time this week the operation has been hampered by poor conditions.
The Australian Navy ship HMAS Success is in the search area and has been joined by five Chinese ships.
On Thursday, Beijing said it was sending another three vessels.
A total of six countries are now involved in the search - Australia, New Zealand, the US, Japan, China and South Korea.
Erik Van Sebille, an oceanographer from the University of New South Wales, told the BBC that if aircraft debris were found, experts could try to work out where the plane had crashed, although it would not be easy.
"This is home to the strongest current in the world," he said.
The reasons why the plane deviated off course and lost contact with air traffic controllers remain a mystery.
Investigators have ruled nothing out, including mechanical or electrical failure, hijacking, sabotage or deliberate action by the pilot or co-pilot.
On Wednesday, FBI chief James Comey said that analysis of data from a flight simulator taken from the home of pilot Zaharie Ahmad Shah should be completed "within a day or two".
Some relatives of the flight's 153 Chinese passengers have refused to accept the Malaysian account of events and accused officials of withholding information.
A US-based law firm, Ribbeck Law, has said it expects to represent half of the families of missing passengers in a lawsuit against both Malaysia Airlines and Boeing Co, and has filed an initial petition.
Chinese insurance firms have begun to offer payouts to the relatives, state news agency Xinhua said.
On Thursday, Malaysia Airlines took out a full-page condolence advertisement in the New Straits Times, saying: "Our sincerest condolences go out to the loved ones of the 239 passengers, friends and colleagues. Words alone cannot express our enormous sorrow and pain."