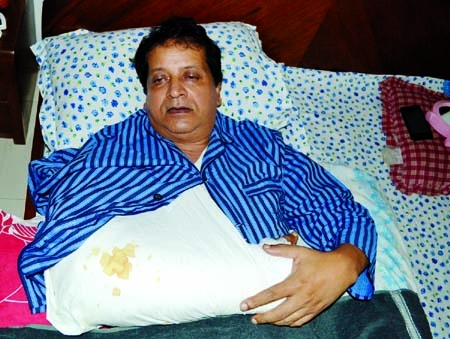 Noted actor Manos Bandyopadhyay was critically injured in a road accident in the cityâs Dhanmondi area recently.
On March 23 evening, when Manos was returning home after finalising his acting in Nargis Akhterâs new movie Joiboti Konnyar Mon a private car pushed him on the street of Dhanmondi Road No 32. As a result, wrist of right hand of Manos was fractured and bones of the wrist were broken down into three pieces. Then he was admitted into a nearest hospital.
After staying there five days under the treatment of Dr Prof Ekhlasur Rahman he returned home.
But later he again went to physician for thorough check-up.
Manosâ wife Ruma told this correspondent to pray for her husbandâs recovery.