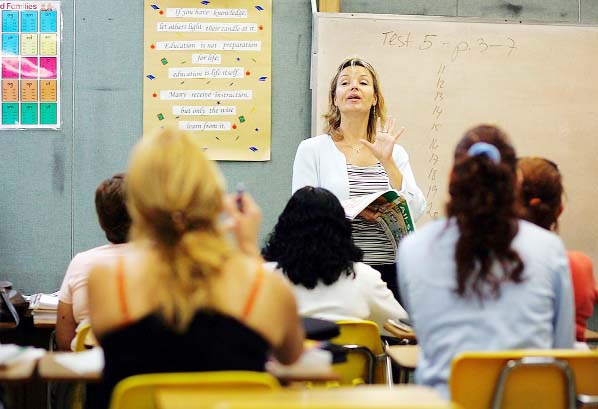 Tamar Jacoby :
"Press one for English, marque dos por EspaÃ±ol." Few instructions seem more grating to many English-speaking Americans - a sign, many fear, that we are becoming a bilingual country.
Their fears are misguided. Yes, America's foreign population has grown dramatically in recent decades - from just 10 million in 1970 to more than 42 million today. Yes, nearly half these newcomers have Latino origins. Yes, roughly one-fifth of Americans speak a language other than English at home. But immigrants and their children understand better than anyone: English is the language of success in America.
English language learning is a chaotic, neglected field. Demand far outstrips supply. Programs are underfunded. Many teachers have little training. - Â
Virtually all newcomers who arrive in the U.S. without English improve their proficiency over time. Research suggests that those arriving today are learning English faster than earlier waves of immigrants, including those who arrived in the early 20th century. Of those who speak a language other than English at home, 79% say they speak English "well" or "very well." In the second generation, the figure is above 90%.
This is a success story most Americans do not know. Still, it masks a problem: a deeper, longer-term challenge rooted in the gap between survival English and the level of proficiency needed to excel in the United States, the kind of English that allows newcomers to live up to their full potential and help their children live up to theirs.
Many immigrants sense the difference, and it shows up starkly even in the imprecise self-reported numbers we rely on to gauge language skill. According to the Pew Hispanic Center, a majority of foreign-born Latino adults - a narrower group than the one above that is doing so well - say they speak English less than "very well." Few things are harder for an adult than getting to fluency in another language, and newcomers get distracted along the way.
Many newly arrived immigrants make an all-out effort to learn basic English. You find them in classes across the country: 20- to 40-year-olds who arrived in the U.S. just weeks or months before, sweating out the difference between "I am" and "I was" on Saturday mornings or after work. It takes drive and determination, and it's hard not to find it inspiring, yet it's often short-lived.
Most classes move slowly. They meet for only a few hours a week. Quality is uneven. Many students soon intuit what research shows: It takes, on average, 100 hours to move up a level - from low beginner to high beginner or high beginner to low intermediate. And if students don't make fairly rapid progress, many of them eventually stop coming to class. Once they master survival English, other priorities reassert themselves - usually spending the time at home with their children or working a second job.
The truth is, many adult Latino immigrants speak English about as well as most Anglos speak Spanish. But there's a difference: Anglos can get away with survival second-language skills. For newcomers and their children, the costs are much steeper.
As abundant research shows, English is essential for upward mobility. It's the key that unlocks all the doors - educational attainment, employment, earnings, civic participation, citizenship and more. The payoff is even greater in the second generation. The children of immigrants who speak English well fare much better than those whose parents speak little English. There are ways to spur the change that's needed. The first step would be to upgrade the quality of adult English language programs, using targeted federal spending to drive innovation and improvement. English language learning is a chaotic, neglected field. Demand far outstrips supply. Programs are underfunded. Many teachers have little training, and many programs neither provide nor require it.
The best lever for change is funding. Roughly two-thirds of existing programs are funded by the federal government with help from the states. In an era of revenue-neutral budgets, it's hard to see taxpayers spending more on English language learning. But some of the money already allocated could be spent more strategically, requiring programs that receive funding to insist on higher standards - more teacher training, better quality curricula, more private-sector matching funds and more innovative teaching technology, among other improvements.
We should also use federal spending to encourage the spread of programs for adults who've mastered survival English - one approach is classes that combine language instruction with, say, vocational training. Community colleges across the country are picking up on an idea piloted in Washington state: classes with two teachers and double-barreled lesson plans where students improve their English while they earn a nurse's license or a welding certificate. These and other programs like them are drawing millions of adults back into the classroom - yet more could be done.
Last and maybe most important, we as a nation need to set a new norm, helping more immigrants understand the benefits of mastery that goes beyond survival English. This can't be coercive. It can't mean draconian "English only" laws that make it harder for immigrants to get access to government services. And it can't be about disparaging other languages or pitting newcomers against the native-born. Influential Anglos and Latinos - sports stars, pop-culture icons, educators, ministers, military heroes and others - should stand together to spread the message: Immigrants and their families need to aim higher. Survival English is not enough.
Today's immigrants are tomorrow's workers, parents and citizens. We can settle for survival English and the limited economic mobility that comes with it. Or we can do better: English proficiency that leads to skilled jobs, promotions, raises, college graduations and, ultimately, one America.

(Tamar Jacoby is president of ImmigrationWorks USA and author of a Manhattan Institute report, "What Works: English-Language Learning in America," published in December).