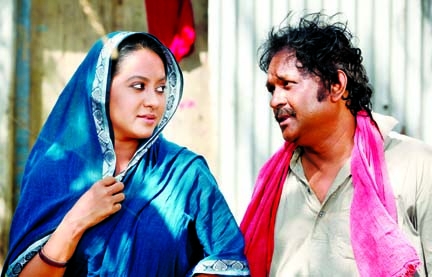 âThe subject matter is that if I would not get good story or role I do not agree to work in any TV play or telefilm now. Story of this play written by Pantho Shahriar is nice. Not only my character but also other roles are very important in the play. I have tried my level best to express my role, Sokhina in the play. I think viewers will also enjoy the play,â popular TV actress Tarin said this while talking about her performance in a TV play titled Bewarish Manush, which was directed by Tariqul Islam.
Shooting of the play was wrapped up on Monday in Manikganj. Popular actor Azad Abul Kalam performed in role of Tarinâs husband, Mannan in the play.
This pairâs last viewersâ choice TV play was Sabuj Velvet, directed by Abu Raihan Jewel under the story written by Muhammad Jafar Iqbal.
Performing in that play Tarin received special honour for her performance. Â
After the play Sabuj Velvet, both Tarin and Azad Abul Kalam agreed to perform in Tariqul Islamâs play Bewarish Manush for their penchant.
While talking about the play Azad Abul Kalam told this correspondent, âIn fact, story of Bewarish Manush is really nice. Earlier I had worked under the direction of Tariqul Islam. He is a talented director. He makes any play very sincerely and carefully. I believe viewers will enjoy the play.â
Md Habib acted in role of Poltu, only son of Mannan-Sokhina in the play, while Humayun Kaberi performed in an important role, Hasan in Bewarish Manush. This play will go on air in any satellite channel in Eid-ul-Fitr, said Tariqul Islam.
On the other hand, Tarin has already started taking part in shooting of Niaz Mahbub directed drama serial titled Kalo Mokhmol.
Therefore, Tarin acted Independence Dayâs special play titled Anuchchhedâ71, directed Shanta Rahman, was aired on ATN Bangla on March 26.
However, under the script written by Azad Abul Kalam Rahmatullah Tuhin directed drama serial Kshonikaloy is being aired on Maasranga TV now. His acted drama serial titled Jogajog Golojog, directed by Ezaz Munna, is being aired on NTV now.Â Â Â Â Â