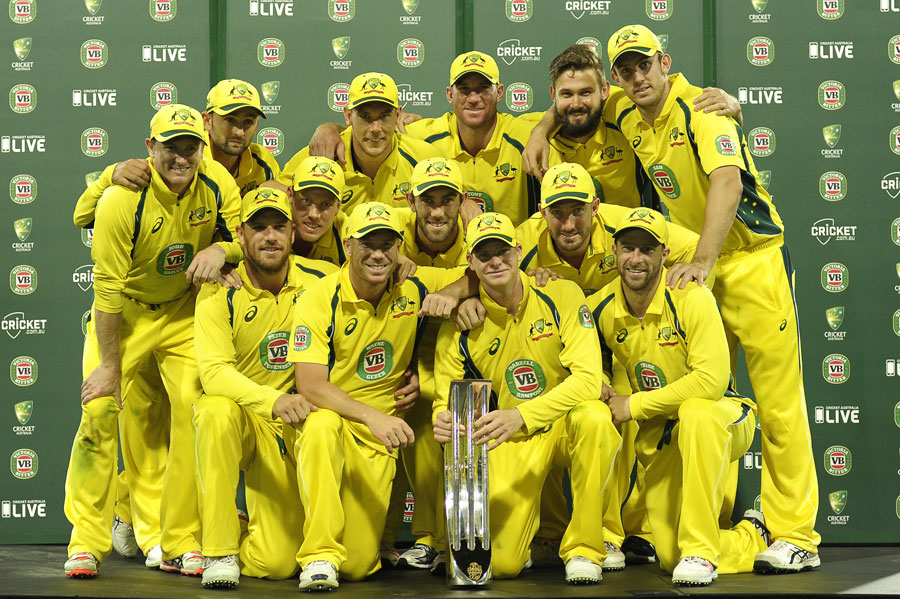 The Australia players pose with the series trophy after 5th ODI against India at Sydney on Saturday.

Manish Pandey scored a brilliant unbeaten 104 as India beat Australia by six wickets in a thrilling one-day international at the Sydney Cricket Ground on Saturday.
After Indian captain Mahendra Singh Dhoni won the toss and decided to bowl, Australia scored an imposing 330 for seven off their 50 overs thanks to centuries from David Warner (122) and Mitchell Marsh (102 not out).
But after losing all four previous games in the five-match series-despite scoring over 300 runs three times and 295 on the other-India avoided a whitewash when they reached 331 for four with two balls remaining.
Pandey, who only came into the team because of an injury to Ajinkya Rahane, was in magnificent touch as he brought up his maiden ODI century from only 81 balls.
The 26-year-old hit eight fours and one six as he teamed with Rohit Sharma (99) and Dhoni (34) to guide India to victory.
The Indians had started their run chase brilliantly, with Shikhar Dhawan and Sharma having no trouble against the Australian attack.
Dhawan, who scored a century in the fourth ODI in Canberra on Wednesday, was particularly punishing, blasting his way to a rapid-fire half century and taking the Indian total past 100.
He brought up his 50 from just 42 balls but on 78 he tried to hit John Hastings over midwicket and was brilliantly caught in the deep by Shaun Marsh.
The in-form Virat Kohli came and went for eight but Pandey was in superb touch from the moment he arrived at the crease.
He and Sharma put on 97 before the opener got an edge to Wade to fall one run short of an 11th ODI century.
Dhoni struggled initially and Australia looked like winning until the Indian captain began to find his touch, his big six off Mitchell Marsh in the final over getting his side close enough to take the victory.
"I think we've been competitive in the series," Dhoni said.
"The goal was to win matches. The first four games, I thought were close, but we didn't close it down well.
"That's important in the ODI format. Every over matters especially in a high-scoring game."
Earlier, the Australians cruised to one more big total on yet another lifeless wicket in a series where the lowest score was India's 295 in Melbourne last Sunday.
"It's been a pretty big run-scoring feast," Australian captain Steve Smith admitted.
"Tonight was a masterclass in chasing.
"We missed a few opportunities in the field, but that happens in cricket, but we have to move on and improve."
The two teams move onto a three-match T20 series, beginning in Adelaide on Tuesday.