Mahiya Mahi in 3 roles in one movie 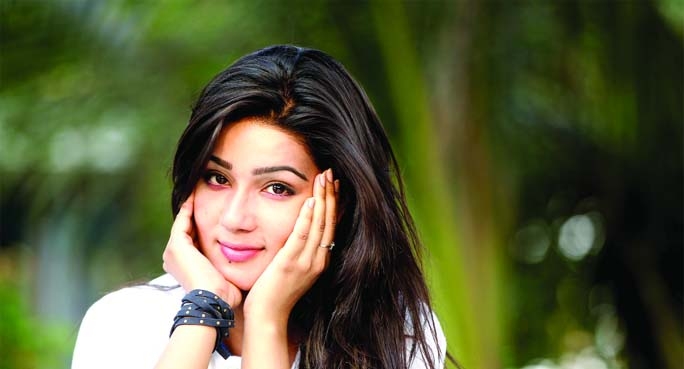 Till now popular heroine of present time Mahiya Mahiâs several movies have released. But she didnât seen to perform in three roles at a time in one movie.
For the first time, Mahi will be appeared on the screen in roles in Zakir Hossain Raju directed movie Dobir Shaheb-er Sangsar, which is scheduled to be released in 91 cinema halls across the country on April 4. Â
At first, Mahi will be seen in role of a maidservant named Chumki. Later in the story of the movie it will be known that Chumki was brought up in a dancerâs house whose name was Daisy. But that was not true. Her real name is Protikkha. Who is this Protikkha? It is the main story of the movie Dobir Shaheb-er Sangsar.
While talking about her performances in three roles in a movie Mahiya Mahi told this correspondent, âIt was really challenging for me to act in three roles at a time in a movie. But Raju sir cooperated me well. Therefore, unit members also cooperated me while taking part in shooting of the movie. I am requesting the viewers to go to cinema halls to watch this movie. I hope they will enjoy the movie.â
Director Zakir Hossain Raju said, âMy previous successful movie Poramon was full of tragedy. But the movie Dobir Shaheb-er Sangsar is fully entertainment based. I am giving assurance the viewers that they will enjoy it. Everybody including Mahi performed outstandingly well in the movie.â
In this movie, Aliraz acted in role of Mr Dobir. Bappi Chowdhury, Rose, among others, also performed in Dobir Shaheb-er Sangsar.
It may be mentioned that Mahiya Mahiâs acted last commercially successful movie was Iftekhar Chowdhury directed Agnee.
According to the film related experts, till now Agnee is the most successful movie of this year.
Director Zakir Hossain Raju has changed title of his new movie Onek Sadher Moina, which was earlier titled as Moinamoti. Mahi also acted in this movie. Anisur Rahman Milon and Bappi Chowdhury performed against Mahi in this movie.
Therefore, Mahi is also taking part in shooting of Saikat Nasir directed movie Desha now. Shipon is acting against her in this movie, Mahia said.
Bhalobashar Rong, Annyorokom Bhalobasha, Bhalobasha Ajkal, Tobuo Bhalobashi, etc are Mahiya Mahi acted mentionable movies.Â Â