UK to give sanctuary to unaccompanied refugee children 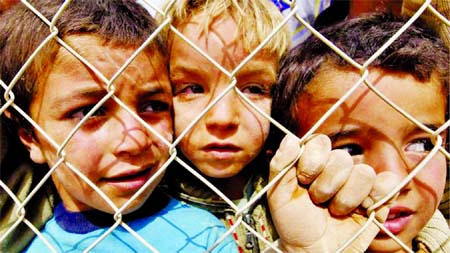 The UK will accept children from refugee camps in the Middle East. Internet photo

The UK is to accept more unaccompanied child refugees from Syria and other conflict zones - but the government has not said how many.The Home Office will work with the UN High Commissioner for Refugees to identify "exceptional cases" from camps in Syria and neighbouring countries. The UK is to take 20,000 refugees from Syria by 2020 - but campaigners want 3,000 children to be taken from Europe.Save the Children said child refugees in Europe were "incredibly vulnerable". The government also said it was giving Â£10m to help vulnerable refugee minors already in Europe; some could be brought to the UK "where it is in their best interests".Campaigners welcomed the announcement on child refugees, but Labour warned about a "false distinction between refugees in the region and refugees in Europe". UKIP said Â£10m was a "minuscule amount".The UK has already accepted about 1,000 refugees from Syria under the Vulnerable Persons Resettlement Programme, which the government expanded last year. But Prime Minister David Cameron has come under pressure from Labour and the Liberal Democrats, as well as from within his own party, to do more.